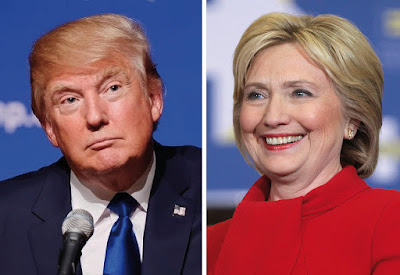 Hillary Clinton lost the presidential election to a racist, misogynist, lecherous, gun-loving, militaristic, anti-environmentalist, tax-avoidance, former bankrupt billionaire. Why? Because, as exposed by WikiLeaks, she is funded by a Wall Street, right-wing Israeli (as opposed to its ordinary citizens) and Saudi elite who shape her policies and favour a world order based on a triumphal globalisation of deregulation that has led to the destruction of indigenous American manufacturing industries and the loss of millions of jobs as their unpatriotic owners transferred their operations to countries where labour is cheap.
The Democratic establishment secretively undermined the campaign of Bernie Sanders, one of their own presidential candidates, an honest progressive socialist who represented the only true alternative to Trump. Unlike Obama, he was prepared to mobilise the poor and middle classes, properly regulate the financial institutions, tax the wealthy, implement free health and higher education student funding, build infrastructure and dismantle free trade agreements such as NAFTA.
Obama did some great things in office. But his failure to honour his populist “Yes We Can” motto by mobilising the nation to stand up to the banks and reform the economic system after the crash of 2008 led to his alienation from the impoverished masses.
Trump filled the vacuum that the Democratic Party hierarchy helped create. But he represents a lie. In the area of economics for instance, real sustainable jobs lie partly in renewable manufacturing, renewable energies, non industrialised organic farming, IoT technologies and not in bringing back coal and increasing other fossil fuels extraction. Trump will start destroying the hard won global consensus on combatting climate change. Life in all its forms on the planet will suffer as a consequence.
No comments:

This photograph appeared this weekend in a very special pioneering edition of the Galway City Tribune that was provided free of charge to all households in the Ballinfoile-Castlegar locality of Galway city.
It shows a residents' protest in the summer of 1989 outside a meeting of city councillors in City Hall. They were demanding recreational and social facilities in a neighbourhood devoid of such essential community infrastructure even though each household had been levied £500-1000+ to pay for such.
This protest was a finale of a two year campaign that I helped organise. I was then still in my twenties. That evening we secured a series of outdoor sports and leisure facilities including playing fields, a playground, tennis courts, changing rooms and a parkland. We were overjoyed. But sadly it took another 27 years before we finally benefited from an indoor equivalent. It is a state-of-the-art complex comprising, foyer, multi-purpose rooms, Olympic size basketball court, catering area, changing rooms, carpark eetc located in the geographical heart of the locality. It will be publicly owned and managed by the local community in conjunction with the social service enterprise company known as SCCUL. This is great news and we welcome all who made it possible including the community activists, the present Council, council staff including Liam Hanrahan and Shraon Carroll and of course the ex Mayor Frank Fahy on whose watch the complex was completed.
But no community should have had to witness generations of their children being denied leisure facilities. Many of the kids that appear in the photo now have their own children. Some of the adults are no longer alive. So they never saw their hopes and dreams come true.
Since the coming of modern Ireland in the early 1970s and the corresponding growth in urban areas, it was the politically well-connected property speculators, builders and the developers who were allowed to make fortunes out of creating mile after mile of housing estates and streets devoid of community facilities for all ages. They created a soulless urban sprawl rather that resident-centred 'urban villages'.
In countries such as Austria, schools, parks, social centres, public transport and cycle networks are put in place before the people move in. Why not Ireland? People should come before the profit of a small coterie number of speculators.
Finally a big 'Bualadh Bos' to the present hard working team of fellow volunteer hardworking, dedicated, visionary and generous activists who finally secured success including Róisín Ní Fhearrachair, Tímea Becsák, Noelle Donnellan, Mags Douglas, Thomas Cox, Claudiu Baranyai Milagrosa Urroz, Sabrina Commins, Tom Hanley, Paul Hayes, Justine Delaney Michele Chiperi, Una O’Connell and those who were with us until recently including stalwart Michael McDonnell, Helen Caird, Jamie McLaughlin, Laurence Daly, Valerie Pointer, Sheila Mangan, Keith McDonogh, Michael Tiernan. Caitriona Nic Mhuiris Suzanne McNena, Johanna Downes, Tom Costello, Frank Fahy, Senator Trevor Ó Clochartaigh. Catherine Connolly TD. and those who helped initiate it all those years ago including Nevin Breen, Peter Rowland, Daibhi O'Cronin, Irene Duffy, Irene Hynes and Paul Tannian.
It was a pleasure to have worked with ye all. Now I can happily move on to other campaigns that hopefully won't take so long to conclude. For I don't have another 27 years left in me!!
Ballinfoile Mor/Castlegar Community Updates
No comments:

Save Galway City's Green Spaces from the Bulldozer