Why Cyberbullying, Climate Change, #MeToo, Organic Gardening, Internet Of Things & Bringing the Jungle Back into the City are Connected.

Since 2004, in my professional capacity as a university Science Education and Public Engagement Officer, I have visited hundreds of schools providing amongst other things workshops/talks on Internet Safety and Cyberbullying Awaressness to parents, teachers, teenagers and pre-teens. Over the last few weeks, I have travelled on this mission to primary and secondary schools in Gort, Clonfert, Ballyconneely, Portumna, Castlegar, Oranmore and Galway city.
Upskilling parents in the Online Social Media & online game sites that their children are on (next free workshop is in June); promoting ‘Digital Detox’ days/nights in the home; encouraging young people to develop a sense of community/family amongst their peers; making individuals who feel isolated/depressed due to bullying be aware of the positive role models that exist in the sport/music/acting celebrity cultures that have also been victimised but stood up to the perpetrators and become stronger in the process, and of the need to undo the hostile negativity of the Web particularly its growing objectification and sexual exploitation of young women. 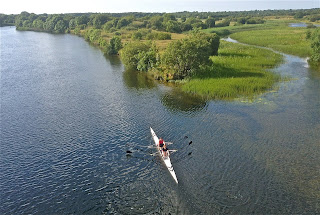 But I have also over the last few years come to the realisation that the natural world is the key to our salvation. It has a fundamental role to play in helping humanity, and particularly the young generation that have grown up with smart phones allowing them to be switched on ‘24/7’, to tackle the physical and mental health issues that are increasingly a negative characteristic of modern society. We are now living on an urbanised consumer extraction-based planet where our disconnect with the rest of Nature is being shown by scientific research to be the Road to Hell for both our species and the rest of the biosphere.
Bringing back the Jungle into our everyday lives and making our cities to be both technologically Smart (Internet of Things) and Green is what we should strive for. It was the theme of my talk last September at TEDx organised by the brilliant Darragh O'Connor and Cormac Staunton.
Check out http://bit.ly/2sfRJPN
But with more and more damage being done to the planet in the form of climate change, high levels of pollution, the acidification of the oceans acidity, air toxicity, destruction of the forests, the drying up of rivers/lakes, increased instances of drought, the extinction of marine and land species, one can feel overwhelmed by the sheer enormity of the problem, become disillusioned and just give up. But taking the Green mantra of Think Global Act Local, I have decided to start a campaign, inspired by the movement in London, to make Galway become Ireland’s first ‘Urban National Park’. Just because such a designation does not exist (yet) anywhere in the world is all the more reason why we in this city need to do something. We can become part of a small group of pioneers (incl London and Glasgow) that if successful will inspire every other town and city across the globe to follow our example. The prize is the very survival of our species and of the rest of Nature.
The Galway Advertiser allowed me the opportunity in a recenthttp://bit.ly/2E7pBQh.
Over the last few weeks I have talked to many people about the concept including my very good friends (& my heroes!) in the local voluntary, community and environmental sectors as well as individuals in the political, business, education and health sectors. All have said similar things- it is ambitious, visionary but very challenging.
To me a movement drawn from all sectors with a sense of purpose and a plan of action based on this positive message could capture the public imagination. In particular the local eco-community activists in Galway city could really show leadership on this issue, drive the agenda forward and make it happen within a five to ten year period. In the interim period the changes to the city in terms of parks, nature reserves, building enhancements, planning regulations, Outdoor Classroom activities that will materialise along the way will improve the quality of life of all our inhabitants.
My full article on the subject is at http://bit.ly/2FXDZLv
edition to promote the proposal. Check out
No comments: