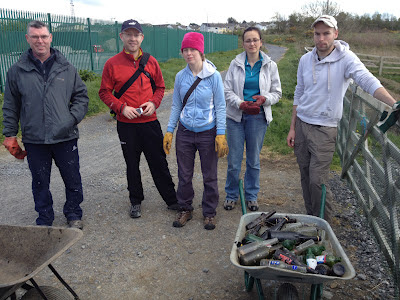 The April clean-up by the Conservation Volunteers of the Terryland Forest Park in Galway city has exposed once again the wanton destruction being done to the Irish countryside and waterways by the high level of dumping of cans and bottles by outdoor drinkers. 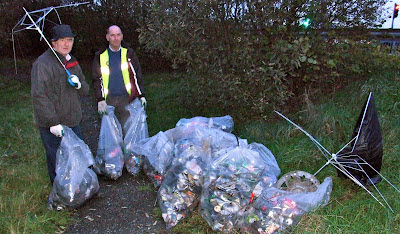 There is a growing problem within Irish society due to binge drinking, particularly by young people which eventually has to be faced up to. This phenomena has escalated in the last two decade as a result of the easy access and availability of cheap alcohol.
In the interim, the problem of resulting litter can be tackled head-on by the introduction of a refundable charge on cans and bottles, something which the 'Friends of Galway Forests' NGO had campaigned on for years. (Click here)
We failed to convince the last Environment Minister and Green Party leader John Gormley to implement such an initiative. But we secured the agreement of Galway City Council last July, thanks to the support of Councillor Catherine Connolly, to introduce a pay-back scheme for cans.
Click here to read about this positive move by city council. 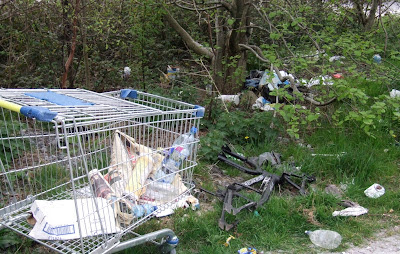 It is time now to re-activate the lobbying of government if we are to save our precious lakes, forests and rivers from disappearing under a layer of plastic and glass.
But in the short term, should we not organise a public 'Cash For Can Day' in June where we organise a huge mass clean-up and bring all the cans to the council recycling plant and use the monies collected to invest in trees for plantings in our civic parks and woodlands?
Finally, thanks to the volunteers who turned up on Saturday. Appreciated.

As a community activist I abhor the way that property speculators have been allowed to destroy the physical and social fabric of neighbourhoods as well as the international image of Galway city.
It is time that residents groups across the city unite to put pressure on Galway City Council to start the process of prosecuting their owners, many of whom are prominent businesspeople.

There are many derelict sites both in the city centre and in the suburbs that are undermining the physical appearance of our city. In the lead up to the Volvo Ocean race, the process of eliminating  such sites be started upon.
But more importantly than keeping up appearances for the benefit of tourism, it should be recognised that these properties are a cancer eating away at the character and spirit of urban neighbourhoods. One prime example is the large ruined house located at the busy Kirwan Roundabout. Shane Connolly and the other owners of this property  have shown nothing but contempt to the local community since they purchased it a few years ago by allowing a once fine house to fall into ruination becoming in the process a magnet for illegal underage drinking and other forms of anti-social activity that has infuriated residents of nearby estates. It was not surprising to locals that this unoccupied house was set on fire last summer nor that a large garage shed on the lands burnt down a few months ago.  It is a horrible eyesore. Local residents asked the council for this property to be classified as a derelict site as we were very surprised that it had not already had this designation.
It is well overdue for City Hall to start going after the wealthy absentee landlords of such properties, and classify them as derelict sites as they are mandated to do under the Derelict Sites Act 1990. This legislation requires local authorities to impose an annual 3% levy of the market value on all such properties. The considerable monies collected should be welcomed by the council as it could help fund essential public services in these times of budgetary cutbacks. Should the owners fail to pay, the authority is entitled under the Act to serve compulsory purchase orders. Their names should also be published in the media.
In many cases such properties were bought during the Celtic Tiger period by property speculators whose only interest was to maximise their profits by selling on the lands at considerable profits once the sites were increased in value by rezoning, road construction or securing multi-home development. Hence, as is evidenced across the city, once well maintained houses and gardens were deliberately allowed to become dilapidated by unscrupulous owners who were often part of the banking, political and developers’ old-boys network that bankrupt the country and ruined the lives and dreams of so many ordinary people. 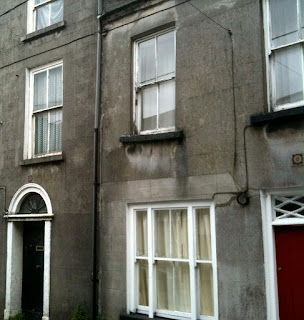 The city manager and the Director of Planning have been written to requesting that the Kirwan Roundabout site and other properties be placed on a publicly-accessible Register of Derelict Sites that contains full details of owners and land valuations and that the required levies be collected as required within the Derelict Sites Act 1990. The benefits of such a strategy to the citizens of the city cannot be exaggerated both in terms of tourism and in enhancing the spirit of neighbourhoods. I have also asked Galway City Community Forum to bring the issue up at the relevant inter-sectoral Special Policy Committees and to monitor its implementation.  Local councillor Frank Fahy has been very supportive of this stance.
2 comments: