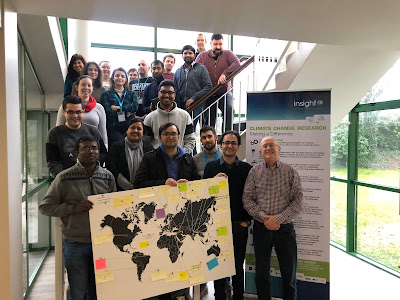 In celebration of international Mother Language Day we installed, in the foyer of our workplace (the Insight Centre for Data Analytics, Data Science Institute, NUI Galway), a World Map in which our colleagues decorated with scripts written in the alphabets of their own language.

February 21st is a global day of commemoration designed to increase awareness of linguistic and cultural diversity. It is officially recognised by the Galway’s United Nations: 31 Languages spoken at my university workplace as an opportunity "to promote the preservation and protection of all languages used by peoples of the world."
It was first initiated by Bangladesh. So it is appropriate then that it was my good friend and colleague Safina Showkat Ara from that country who suggested that we also mark this very important occasion at our research institute. I was only to happy to oblige.

And what a wonderful exercise it turned out to be. For in populating the map we happily discovered that there are at least 34 languages spoken at our research institute- Arabic, Armenian, Bangla, Czech, Dutch, English, French, German, Greek, Hindi, Irish, Italian, Kannada, Kashmiri, Kurdish, Magahi, Mandarin, Marathi, Nepali, Pashto, Persian, Polish, Portuguese, Punjabi, Ukrainian, Urdu, Russian, Sanskrit, Slovene, Spanish, Swahili, Tamil, Vietnamese and Yoruba. Wow!
We hope that this new initiative will become a new tradition that will continue to be observed for years and years to come.

It is also worth noting that my other good friend and colleague Sina Ahmadi correctly pointed out that millions and millions of people across the world are today deprived of learning in their mother language in their own countries. Denial of a people’s right to express their cultural identity has been used throughout history by brutal repressive regimes often to overcome resistance to foreign rule. For hundreds of years the British imperial forces in Ireland tried to destroy our right to independence by a combination of war, ethnic cleansing, introduction of foreign settlements, economic exploitation and a denial of cultural expression by the native Celts.

It was Pádraig Pearse, the great Irish revolutionary and leader of the 1916 uprising against British rule, who summed up so well the need to resist the latter policy of ‘cultural assimilation’, “A country without a language is a country without a soul.”