The beliefs of history's greatest political, religious and social progressives were always condemned by the authorities of their times as dangerous and evil lies. Of course it had nothing to do with the truth and everything to do with the fact that their teachings were judged to be a threat to the powers of the ruling elite.

'Save Our Trees' Rally for City Hall 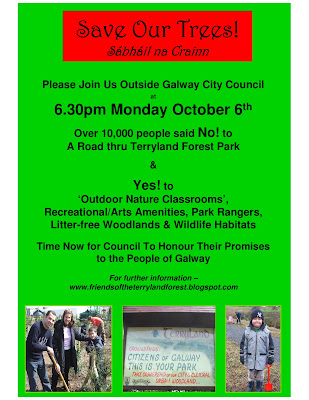 The NGO group that I am chairperson of- the ‘Friends of the Forest’- has decided to maintain the political pressure on Galway City Council to save our local urban Forest by organising a public pro-Tree rally outside City Hall at 6.30pm on Monday October 6th while our local political representatives hold their monthly meeting inside.
We see this rally as pro-Galway City Council and pro-city. We simply want our local authority to activate its existing but dormant policies to provide outdoor leisure facilities for all ages, an annual programme of family events in all our main urban parks and the preservation of our increasingly threatened wildlife habitats. We need more plantings not less to transform barren ugly urbanscapes into picturesque leafy suburbs and tree-lined boulevards. Our wonderful natural heritage areas along the Corrib and in places such as Castlegar, Dyke road, Merlin, Menlo and Ballindooley require improved protection from built development if they are to serve for instance as outdoor classrooms for our school children. Just a few years ago the people of Galway were encouraged in their thousands to come out and plant trees to ‘green’ our city. Sadly what we now hear from the corridors of power is a bitter diatribe from one of our public representatives that he is sick of trees all across the city and even more proposals from officialdom to construct more roads through our scarce urban woodlands. 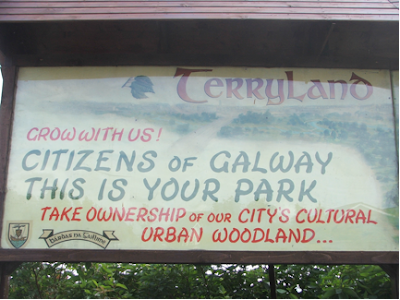 These words and actions should concern us all. Though many councillors and TDs have confirmed their support for our demands, nevertheless, we must maintain the pressure until a decision is reached on the Road and when we see the council's ecological policies being finally implemented. So we need to remind our politicians that over 10,000 people signed a petition last spring to demand an end to a new road through the Terryland Forest while requesting instead the implementation of existing council proposals that include the provision of a forestry learning centre, tree nurseries and an arts amphitheatre as well as the reinstatement of community tree ‘Plantathons’ in an effort to encourage people to regularly use our parks, reduce our carbon footprint and beautify our concrete-based city. Cutting down trees will not reduce anti-social behaviour, clean up our environment nor help solve our traffic crisis. But what could help are park wardens, a litter policy that includes a refundable charge on all drink cans and bottles and a city-wide pedestrian, cycling and public transport infrastructure. 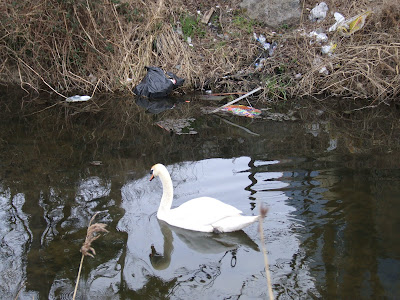 Dumping in the Terryland River that is not just an eyesore but is destroying the habitats of our wildlife
But we still have a fight on our hands. Last Sunday , City Council held a public ecological nature walk through the Forest as part of Irish Mobility Week (looking at alternatives to car transport). The Parks Staff did a great job informing the participants on biodiversity, individual native Irish trees etc. But there were only 17 people on the walk, most of whom were activists in the 'Friends of the Forest' group. For the Council made no mention of the event in the media or in any of the ample literature that was specifically published for Mobility Week!!! Nor have they tried to involved members of the multi-sectoral steering committee which has been largely ignored by City Hall over the last four years. 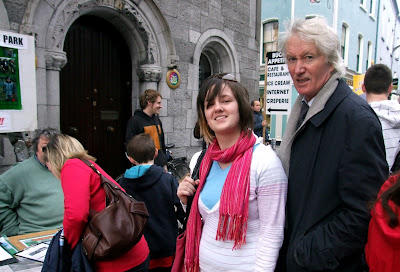 People lined up in their thousands at our stand in Shop Street to sign the petition to save Terryland Forest Park from road development.The girl in the photo was the first person to plant a tree in the Park during the first 'Planathon' in March 2000 attended by circa 3,500 people 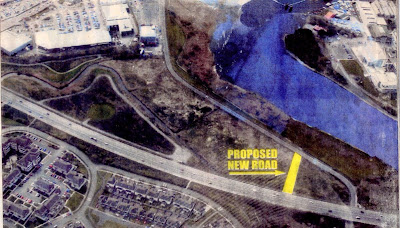 Image above shows location of proposed road through the Terryland Forest Park. Traffic Lights will be located across the Quincenntennial Bridge road where it mets the new road. The development will also include a major widening of the existing Dyke Road transforming it from a relatively quiet backwater road with low vehicle capacity into a heavily populated transport artery. This oldest area of the Terryland Forest Park, first planted in March 2000, with its adjoining wetland area will become nothing more than a glorified 'green' island surrounded by a busy network of roads.
Click here to view the Friends of the Forest website and find out more on Ireland's first urban Commuinty woodland.
5 comments:

Always Forgive Your Enemies.
Nothing Annoys Them So Much
-Oscar Wilde
No comments: 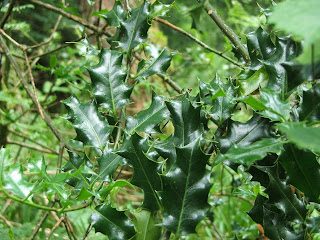 Councillor Crowe is the politician who a few weeks ago made headlines with his "...I am sick of trees all over the city..." -See my article in the 'Friends of the Terryland Forest Park', the campaign website set up to stop the destruction of a vital ecological corridor by the proposal of council officials to build a road through the grounds of an urban forest park
No comments: