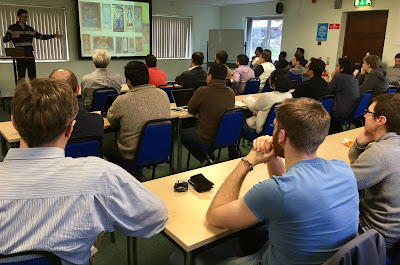 The jovial Ihab introduced us to a Palestine that not too many outsiders are aware off; a land where, in spite of Israeli military occupation and colonial settlements, is rich in natural beauty, culture and history. The inhabitants of the Holy Land are proud of their ethnic cuisine, folk dances, vibrant musical heritage, traditional dress, scenic hillwalking routes, churches, mosques, synagogues as well as ancient Roman/Greek/Jewish and Byzantine ruins. Bethlehem, Nazareth and Jerusalem are great world centres of tourism and religious pilgrimage.
Thinking about Ihab’s talk and the ‘United Nations of Galway’ that is my research institute at NUI Galway, I have come to the conclusion that Trump’s decision to ban travel to the USA for refugees and people from seven countries that have majority Muslim populations will have enormous and immediate negative ramifications not just socially, economically and politically but also scientifically.
Some of the researchers at our university centre are respected scientists from Syria and Iran who often as part of their work attend research conferences in the USA and elsewhere. America is now off limits to them and the research community of Galway, Ireland, Europe and the world will suffer as a result.
Trump will I feel extend the ban to other countries with Palestine probably at the top of the list.
With Trump promoting his newly discovered Christianity (of the conservative strand) and his support of American business entrepreneuralism, I should remind him that Steve Job’s father was Syrian and that the family of Jesus Christ fled to Egypt as refugees to escape probable death at the hands of a despotic ruler.
Trump is bringing a coldness and darkness to a United States that has such a proud bright history of welcoming immigrants escaping religious, racial and cultural persecution.
No comments:

No to Forest Road, Yes to Forest Classroom & Greenway