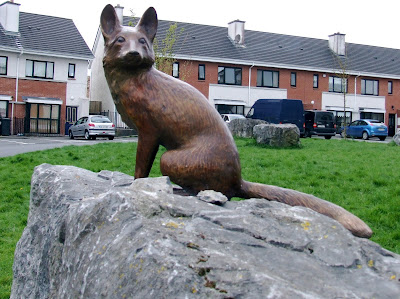 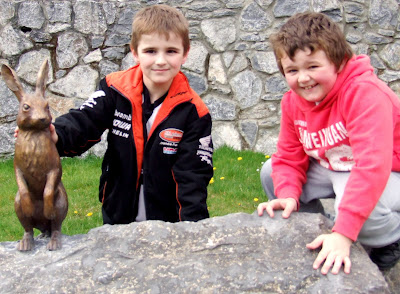 Recently a series of unusual animal sculptures were constructed on rocks in a Galway housing estate in the Ballinfoile area. 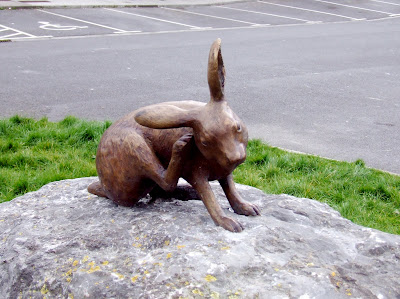 Cast in metal, these representations of Irish wildlife are located in green spaces across the estates of Baile na gCoiste and Ard na Choiste.
These sculptures are strikingly beautiful and powerfully realistic.
So well done to the Galway City Council and the local residents' association for this wonderful initiative that will become I believe an important tourist attraction. 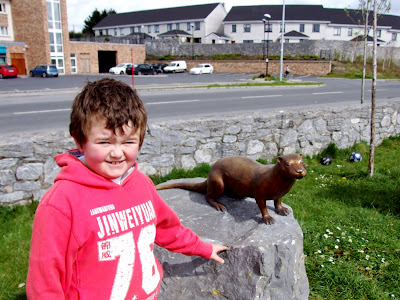 .
More importantly, I earnestly hope that their presence will inspire increased awareness amongst local inhabitants of the importance of protecting the endangered real life versions of the rabbits, hares and foxes wildlife that live nearby in the Terryland Forest Park, which in itself in under threat from encroaching built development. 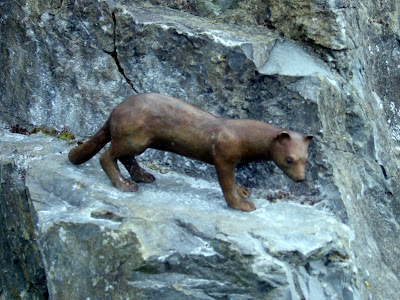 Window of Opportunity Now Exists to Put in Place a Pedestrian, Cycling & Public Transport Infrastructure for Galway City & End Car-Centred Roads Nightmare
A shorter version of the following article (written in my capacity as a Galway City Community Forum representative) appeared recently on the front page of the Galway City Tribune...

In an attempt to help solve Galway City’s growing traffic congestion and secure major state funding for the construction of a sustainable transport infrastructure, the Galway City Community Forum requested direct talks with the Minister for Transport Noel Dempsey TD requesting on the issue.

According to Brendan Smith, a member of the Forum’s steering committee, “The quality of life in our city is being seriously eroded by the environmental, social, economic and health damage caused by over-reliance on private motorised vehicles as the primary mode of transport. Decades of bad planning in our developer-driven society has created a car dependency urban sprawl that will take at least a generation to rectify.
But there is now a window of opportunity being presented by the Government’s recent action plan entitled ‘ Smarter Travel – A Sustainable Transport Future’ which promises for the first time to put people rather than vehicles first with a firm commitment to invest in walking, cycling and public transport as primary modes of transport. The relevant government ministers have talked about giving funding priority to suitable applicant cities. So the onus is now on all local sectors of Galway society to lobby to ensure that it is our city that is a chosen urban location for this crucial state investment. Hence our decision to request an urgent meeting with the Minister for Transport Noel Dempsey on this issue to convince him of the suitability of Galway for this investment and the benefits that it would bring to its inhabitants. We will also be meeting with local politicians and local election candidates to discuss our sustainable transport policies. For since its inception in 2000, Galway City Community Forum has played a crucial part in transforming city transport policy though its active membership of relevant partnership committees and we were for instance amongst the earliest advocates of light rail and quality bus corridors. However we are very concerned that key elements of these policies are being ignored. In early 2002, Galway City Council was a signatory to the Galway City Development Strategy that promised to make Galway a Safe, Child-friendly, Disability-friendly, Pedestrian-friendly, Cyclist-friendly City by 2012. It was agreed by all partners that one way of achieving this core objective was by carrying out a feasibility study into the development of a sustainable Galway Integrated Transport Strategy where pedestrians would be given priority in roads infrastructure followed by cyclists, then public transport users with car-users being at the lowest end of the hierarchy.
Yet seven years on, City Hall as the lead partner has still not carried out this foundation blueprint. Whilst initiatives such as Walking to School programme are to be applauded, nevertheless they will ultimately fail if the roads infrastructure is not radically altered to accommodate the safe ‘free-flow’ of pedestrians and cyclists. Sadly, the latest published programme of works from the Galway Transportation Unit (GTU) seems to belong to a discredited era as it once again gives priority to the old outmoded system of more roads for more cars through its emphasis on prioritising the construction of an Outer Bypass. It talks too of ‘improving’ cycling infrastructure, when in fact there is no city-wide infrastructure to being with. Likewise it makes no significant mention of pedestrians.
So the Forum is now publicly calling on City Hall to honour its transport commitments as signed off in 2002 which are supposed to be completed by 2012.
One way for City Council to make up for lost time and lost ground would be by immediately requesting the Irish government to consider Galway as a pilot scheme for the government’s Smarter Travel Action Plan as well as applying for funding under the EU CIVITAS programme. Whilst our university city is at the opposite end of the spectrum in terms of providing a pedestrian-cycling infrastructure to that of comparable cities such as Oxford or Cambridge, nevertheless there is still a critical mass of local inhabitants that use transport alternatives to the private car and many others that could be enticed out of their cars should a safe suitable environment exist.
No comments: