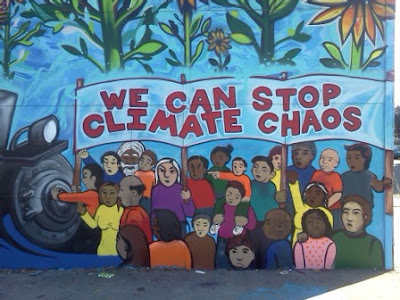 The key issue in tomorrow's local and European elections are Climate Chaos, Climate Justice and the Green Economy.
Global Warming, Equality, Poverty, Jobs and Peace are interrelated. Since 2015, I have worked across Africa, the Middle East and Europe. During these work trips, I have seen the enormous devastation being caused by deforestation, water shortages, pollution, injustices, poverty, large scale, mining, habitat loss, biodiversity decline, a warming climate and GREED. I am genuinely scared.
But everywhere I go I have seen ordinary but inspirational individuals and organisations fighting back against the powerful forces of corruption and destruction who see a price in everything but a value in nothing .
In Galway a number of energetic councillors promoted our community, heritage and environmental campaigns over the last few years, and helped us to achieve some notable successes. Thank you for that and may you be re-elected. But we also need as well other fresh progressive voices, including youth and female, to demand more and more radical policies. The future of so many species including our own is at stake
No comments: 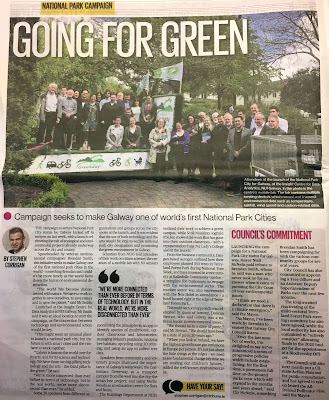 Coderdojo & the Coolest Projects in Ireland! 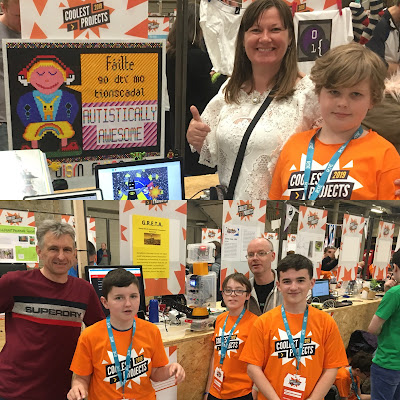 I had a great day in the RDS Dublin on Sunday last as young people from across Ireland and indeed from many other countries enthusiastically demonstrated their coding projects that ranged from tourism apps, to educational games to robotics.
I was particularly proud of the works showcased by the ninjas from Coderdojo Galway, the club that I have been involved in since its inception in January 2013.
Seeing them in action gives meaning and purpose to the efforts of the many volunteers like myself across Ireland who happily give their time free of charge every week to help transform our young people from being passive digital users into active digital creators.
Thanks to volunteers such as Colm, Kieran, Justine, Conor, Michael, Brian and Niki, as well as great leadership for many years from Karl Sweeney and now from Aksana, our club upskilled hundreds of children in coding every year.
Photo shows (bottom) Kieran Tierney , Sean Sheridan-Lally, John Canny, Colm Canny and Eoin Tierney with their Climabot called GRETA. Top of photo shows mother and son team Helen and Oisín Flynn with their hugely important, personal and very powerful 'Autistically Awesome' coding narrative. I have really enjoyed having both individuals in my Saturday morning class at Insight NUI Galway over the last year as they contributed so much to the spirit of this learning community. Helen is a wonderful caring lady whilst Oisín full of creative digital talents. Maith daoibh!