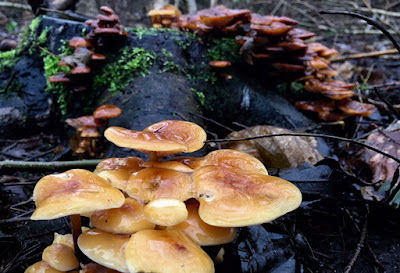 As this photo shows there is a stunningly unique beauty about mushrooms and other fungi living in Terryland Forest Park. Their colours, variety and texture are truly spectacular.
To me fungi are the often forgotten and unsung heroes of Nature. They are the ones that break down dead trees and other organic material to convert them into nutrients that are essential to plant growth.
They are the dominant decomposers that can be said to transform death into life.
Fungi also act as a communications network for trees.

I took this photo of Velvet Shank fungi living off a stump of a tree in Terryland.
No comments: 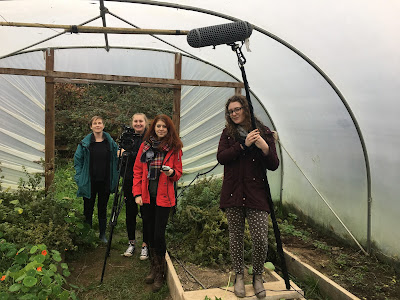 Lovely to have Felicity Silverthorne and her fellow students, as part of their NUIG studies, undertake a few weeks ago a film documentary entitled (Galway) City of Nature on the importance of nature to urban environments. There was a nice focus on Terryland Forest Park and the Ballinfoile Mór Community Organic Garden that included interviews with Ruth Hanniffy(Vincent Wildlife Trust), Pauline O'Reilly (Galway Green Party) and myself.I am so impressed by the fact that Felictiy and other concerned young people are prepared to highlight the need to safeguard the wonderful wildlife and green spaces that exist on our own doorstep but are sadly under threat like never before due to built development, pollution and climate change. The link to the film is at https://www.youtube.com/watch?v=S-ktQ0u4KyU&spfreload=10.Well worth watching (says I unashamedly!!).
No comments: 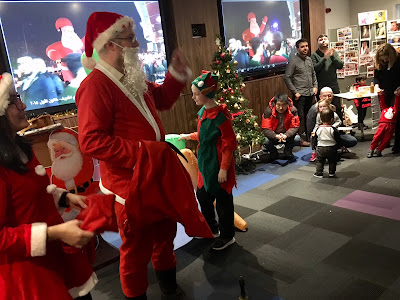 One of the annual highlights at my workplace is the multi-cultural Christmas festival.
For the event, family members and friends are invited along to see and enjoy ethnic cuisine, beverage, dress and images provided by the students that come from across four continents.
A key highlight of the fest is the appearance of Niall O Brolchain as Santa who aided by his trusty elves Anh Thu and young Daniel, happily dispenses gifts to and from students in the lovely tradition of Chris Kindle.
The smartly red-attired Niall was of course Galway city's first Green (environmental) Mayor back in 2006. 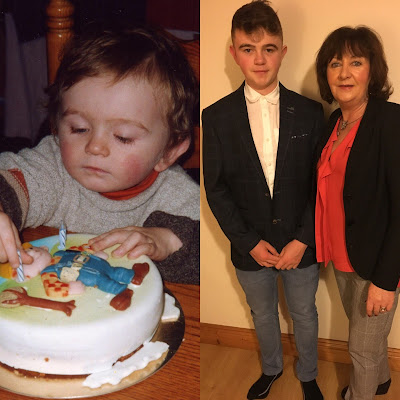 On December 23rd we celebrated the 18th birthday of our youngest son.
The beginning of Dáire’s adulthood meant that his male and female friends gathered together at our home to enjoy a lively garden and house party. For the first time ever, we allowed alcohol to be consumed in our place by school-going (18 year old) teenagers. Yet in spite of dire warnings from some parents who had survived and lived to tell the tale of their sons and daughters coming-of-age party nights his friends, whilst loud, boisterous and merry, did nothing untoward and were in fact astonishingly very good. The furniture was not broken up, the house was not destroyed by fire and the neighbours were not attacked.
Whilst proud that Dáire had reached manhood, I was at the same time sad. Both my sons have contributed so much to my learning and development over so many years. Their knowledge, expertise and first hand experience of classroom subjects, pre-teen/teen online social media, films, cartoons, fairy tales, sports/pop stars and the latest fabs played an essential part in shaping the content and deliverability of my Science and Technology school initiatives. I took on the role of a ‘sponge’ soaking up what they said and did without them consciously knowing that I was doing so.
Thanks to Dáire and Shane I saw all the in-vogue films of the DC/Marvel super heroes, the Lord of the Rings trilogy, Hobbit, Harry Potter, Star Wars, James Bond, Wreck it Ralph, War Horse...
As children they took part in my never-ending cycle of community campaign protests, science exhibitions, coding sessions, retro-gaming nights, gardening digs, forestry plantings, litter picks, art in nature projects, heritage tours and bike excursions. Taking on the regular chores of parenthood along with my ‘O so good wife’ Cepta, I in return chaperoned them to kayaking, hurling, rugby, soccer, art, guitar and school musical concert sessions. I joined in their delight when they excelled in some of these activities and was a shoulder to cry on when things went sour. I empathised with them when, after an initial burst of enthusiasm, their interest in one sport or another waned.
Over many summer holidays spent by our family visiting water-themed parks, I gritted my teeth, closed my eyes and pretended to laugh (in reality it was nearly always a scream!) as I fell from the highest, most death-defying dangerous parent-unfriendly water rides that mankind has ever devised. On a more gentle note there were the regular voyages of discovery to the marine world that is Atlantaquaria, to seashore rock pools, to woodlands, to the Dublin Zoo and on trips to destinations across Ireland.
When they became teenagers, I perfectly understood why they no longer considered it ‘cool’ to pal around with dad or take part in his off-the-wall activities or even to acknowledge my presence when I came into their schools. It has thus been the way of teenagers since time immemorial.
However I was thrilled every time they wanted me to go with them to the latest cinema blockbuster, to the gym or to a football match.
After twenty six years the Age of Childhood in our home has finally come to an end. In spite of the few normal bouts of tantrums, disagreements, upsets and pain along the way, I will miss it so much as it has kept me Young at Heart for so long. I have been blessed in being a father of two fine boys.
Photos show Dáire at his second birthday and with his mom Cepta on his eighteenth birthday
No comments: