Final session to School Parents for 2020/21 & the early days of Social Media, 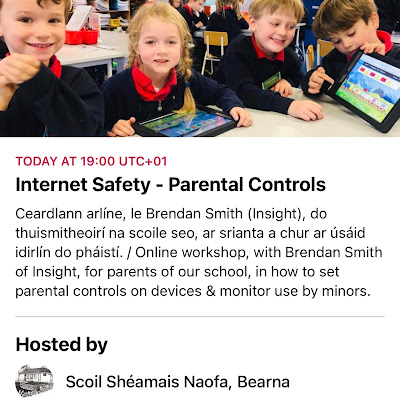 Just finished an Internet Safety workshop to the parents of Scoil Shéamais Naofa Bearna. Thanks to príomhoide Máire Báicéir for the opportunity.
It is my final session for parents for 2020/21.
The early days of Social Media (2004-2009).
When I started Cyberbullying Awareness activities for parents, youth and teachers in 2005 I was one of the first to do so.
Online social media was in its infancy with Orkut, Myspace and Bebo probably being the big three in this domain. Twitter, Instagram and Snapchat had yet to be invented.
'Blogging' (blogspot) was very popular, allowing ordinary non-techies to create their own website for the first time.
There was an innocent then about our use of the web. We passionately believed in the power of online SOCIAL media as a force for good and for sharing stories and images between old friends from the real world and new found friends from the world of the World Wide Web.
I use to give a range of workshops on setting up websites, via a blog, and a personal social media account, via Orkut etc, to ethic minorities (e.g. Brazilians in Gort and the residents of the Eglinton asylum seekers accommodation centre), businesses, community groups, schools, politicians (including a young city councillor by the name of Niall O Brolchain!). For the vast majority of participants from across all sectors, it was their first time to have an online presence.
The Nastiness was there.
But sadly even then the nastiness and cyber bullying had started. Online harassment campaigns, stalking and misogyny were all there with the sexual abuse of young teenage females being to the fore.
It does not have to be like this!
I remember well the government promising in those early days to clamp down on online nastiness and bring the culprits to task with the promise of new legislation and the establishment of a digital safety office. In spite of many requests and many promises, I am still waiting for this to happen.
No comments: 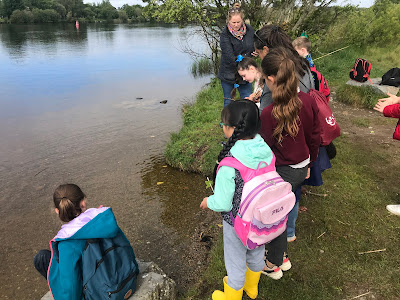 On Friday I took a group of primary school children on a guided walk from the Woodquay 'Plots', along the banks of the River Corrib to Terryland Castle and on into the woods and meadows of Terryland Forest Park. The teachers and pupils interacted with this beautiful natural environment using their senses, making boats from reeds to float in the waters of the Corrib, studying the diverse range of flowers and trees and enjoying the new educational heritage sculpture trails.
Thankfully there was no major occurrence of litter either along the river banks or in the woods. It was very clean. But a weekend of partying near Terryland Castle has subsequently done so much harm.
In 2019, Galway City Council abolished the Cash-for-Cans scheme that was introduced in 2011 at the instigation of community lobbying supported by councillor Catherine Connolly (now TD). I have to compliment the then City Hall officials for their support in implementing this pioneering scheme, the only local authority in Ireland to do so but a scheme that did and still does exist in many other European countries. Sadly the government that year refused our demands to bring in a similar nationwide initiative that would also include glass bottles. However the present government has promised to roll out in 2022 a new deposit and return scheme for plastic bottles and cans. This is welcome news. But it needs though to be extended to include glass bottles and metal cans and it should be introduced NOW! Every day that we don't act the natural environment suffers.
Likewise the present council needs to be more proactive and show leadership on this. We have to wait until 2022 for full time wardens for all three main parks to be introduced- thanks to Councillor Imelda Byrne for tabling a great motion supported by all councillors and for working closely with me on this. I can understand at one level (budget) why it will not take place until then. But, in the interim, why can the council not put in place, as promised, bins at the entrances to major green areas and to work with the community to set up and support units of park volunteer wardens? Ryan Crowell and myself showed a few weeks ago (see a previous posting from last month) that having a presence on the ground and talking to those socialising outdoors can make a huge positive difference.
Furthermore there has to be a much harder line taken against those littering with a need for more prosecutions. However for that to be effective, on-the-ground wardens are required.
There is also the ridiculous situation that, due to GDPR, we are told the names of those that are actually prosecuted cannot be published in the media. Local government and national goveernmment need to take a test case to Europe on this- laws are suppose to help society and the public, not to protect the anti-people protagonists.
No comments: 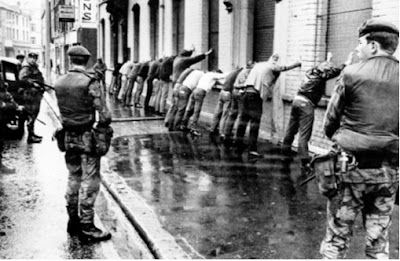