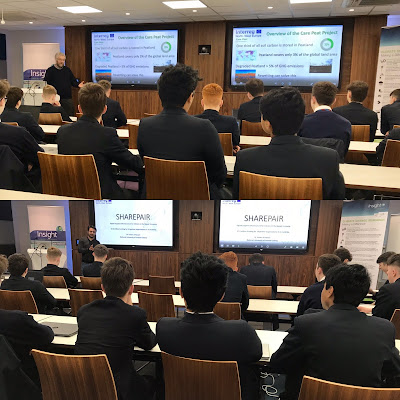 The research taking place at my university workplace is contributing to tackling the issues being caused by Climate Change, biodiversity loss and the excesses of the consumer society.
As part of our Educational and Public Engagement (EPE) programme at the Insight Centre for Data Analytics of the Data Science Institute NUIG, we have been offering since last summer a package to visiting schools that combines an introduction to our research, a coding workshop, an immersive Virtual Reality experience and a guided tour of the Computer & Communications Museum.

The first part is based on talks by our researchers on their work (mostly in collaboration with other European countries) that more and more has a strong emphasis on Sustainability and on Citizen Science. . On Tuesday, Niall O’Brolchain outlined the 'CarePeat' partnership research project to students of St.Jarlaths College from Tuam. CarePeat is about reducing carbon emissions from and restoring the carbon capacity of Europe’s degraded peatlands. Niall pointed out that, though only covering c3% of global land surface, peatlands store twice as much carbon as all of the Earth’s forests combined, but are now responsible for 5% of global carbon emissions due to degradation.

The second talk was by Umair ul Hassan on his research project entitled 'Sharerepair'. Its purpose is to roll back Europe’s fastest growing waste stream by scaling up citizen repair shops through the use of digital tools
No comments: 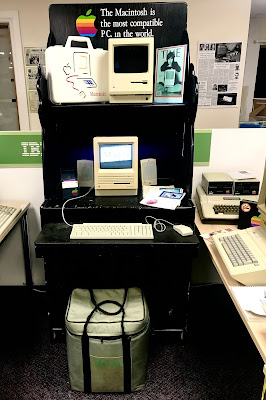 A working Macintosh SE (System Expansion) from the late 1980s has been added to our new interactive Apple zone.
This personal computer is part of an initiative to make the museum even more 'hands-on' in readiness for the museum being opened every Saturday from next month onwards.
It will also form part of a major exhibition to be launched in April entitled "A Byte of the Apple”.
This particular SE comes with an array of business and games software including MacDraw, Excel and Star Wars.
It was secured from Adrian in Waterford.
The black wooden display unit on which the new Mac proudly sits was donated by Tom Callanan. The Mac Carry Bag was supplied by Pat Anderson.
So a big 'Bualadh Bos' (Irish =round of applause) to Adrian, Tom and Pat!!
Launched in March 1987 the SE was the first Macintosh to come with an internal drive bay for a hard disk or a second floppy drive and was the first compact Macintosh that featured an expansion slot
No comments:

Friends from Conflict Zones Showing the World a Better Way. 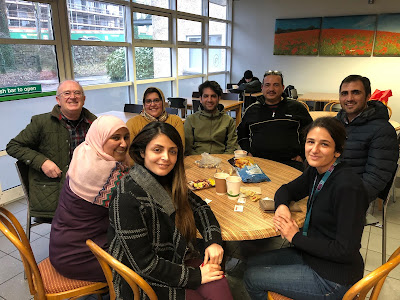 Photo shows myself and my colleagues from Iran, Iraq, Kashmir, Libya and Yemen enjoying each other’s happy companionship at our workplace café. Though their homelands and their families are suffering from conflict-be it in the form of occupation, bombings, oppression, civil war, invasion, ethnic discrimination, religious discrimination, economic sanctions…, nevertheless here in Ireland these lovely individuals are united in friendship. This is as it should be.
It makes me feel hopeful that our species will ultimately become ‘civilised’, and that humanity will be bonded together by peace, equality and respect. Since time immemorial, too often we have allowed individuals to take control by using diversity in culture, religion, ethnicity, skin colour and gender to sow hostility and mutual distrust rather than as a strength and something that we should celebrate.
I am also proud that our university and our country (in spite of its many social and economic problems that need radical solutions) promotes tolerance and diversity. This is the view expressed by many of my present and former asylum seeker friends towards this country and city over the years. It is still at many levels an ‘Ireland of the Welcomes’, due I feel primarily to two reasons. Firstly we were until recently a nation of small farming villages portraying the friendliness of rural folk everywhere towards strangers. Secondly, as an occupied, oppressed and colonised country for 800+ years, many of us instinctively feel empathy towards other peoples that are victims of conflict.
But we have got to remember too that we are all neighbours living today in one global village and more than ever before we need to stand together against a common foe in a truly 'just' war, namely to save the planet from the ravages of human-induced Climate Chaos that we increasingly see every day. From the Arctic in the north to Australia in the south, the world is on fire.
No comments:

Colin donates his favourite Pet to the museum! 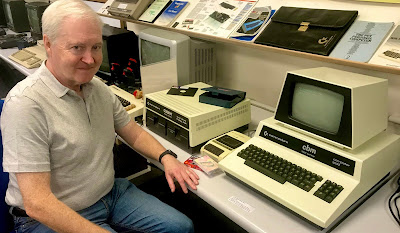 What a great start to 2020! We are pleased to announce that Colin Lafferty, one of museum’s most recent volunteers, has generously gifted us a working 1979-1980 Commodore PET 3032 computer complete with a C2N-B datasette cassette recorder, a Commodore 4040 5.25 inch floppy disk dual drive and a bundle of business and games software.


This is an amazing and welcome addition to our ‘hands-on’ collection the Age of the Microcomputer’.


The PET series is truly one of the great icons of the computing world, its distinctive shape forever associated with television and movies, especially of the science fiction genre, during the late 1970s and early 1980s.


For more information on this remarkable computer check out Colin’s blog at http://laffertycolin.blogspot.com

I would like to also point out that my good friend Colin could be referred to as a pioneering advocate of electronics communications and computing in Galway.  He was a founding member (vice-auditor) of the Computer Society (CompSoc) in 1978 at what was then the University College Galway/UCG (now NUI Galway/NUIG) and became its auditor in 1980.
No comments: