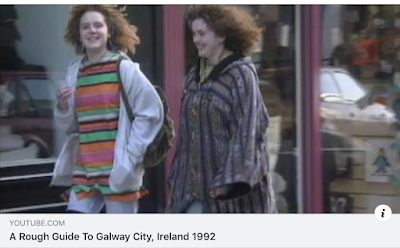 This RTE video clip from 1992 has been doing the rounds over the last few weeks. I have been contacted innumerable times about it due to the fact that I am interviewed in it (wow- I was kinda handsome once!) So I think it is well past time that I made a reference to the film and to what I was doing in Galway at the time. 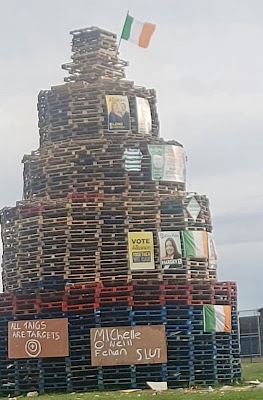 Unionists in the North have every right to express their cultural identity every year on July 12 with marching bands, bonfires and child friendly parties.
But whilst sectarian triumphalist marches through Catholic neighbourhoods are mostly banned these last few years, sadly too many Loyalist bonfires in Northern Ireland are opportunities for open celebrations of an apartheid colonial past where Irish Catholics and nationalists were treated as a despised indigenous people with a low intelligence practicing a primitive form of religion led by an anti-Christ.
I thought that, as the years passed, such beliefs and expressions of pure evil would be consigned to the history books.
Sadly this is not the case. There are still those people of all ages across the Six Counties who sing songs and scream words of racial and religious bigotry around neighbourhood bonfires where they openly burn effigies of their political opponents (Sinn Féin, SDLP & Alliance) and jerseys of Glasgow Celtic, call Irish republican female leaders 'sluts' and have signs emblazoned with the word 'KAT' ("Kill All Taigs"). 'Taig' is a derogatory term for Catholics and Irish nationalists.
The hatred with which they burn the flag of the Irish republic blinds them to the reality of what this historical tricolour represents, namely the hope for a peaceful inclusive future Ireland where Catholics (green) and Protestants (orange) live in peace and harmony(white). They forget too that Irish republicanism was founded by Irish Protestants such as Wolfe Tone who were inspired by the French Revolution's motto of 'Liberty, Equality and Fraternity', slogans which are as important today as they were in the days of revolutionary France.
No comments: