The Last Christmas Party (for 2018) with Galway’s Forgotten Heroes 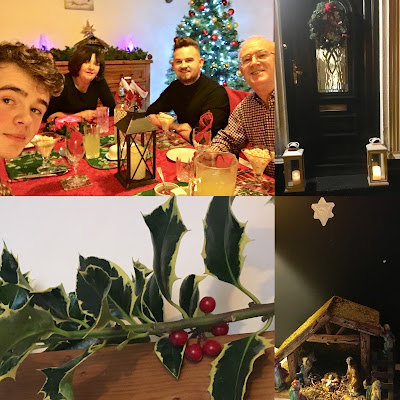 So in honour of our parents for this and all Christmases, our family (as with so many other families) continue to observe some of the best of the old Irish Christian traditions. We decorate the walls with holly, make a Star of Bethlehem backdrop for an internal Nativity scene, place candles on the windows and doorways with some family members attending the local church and then enjoying a festive meal together.
Whilst I have many disagreements with the Catholic Church stretching back to my teens, nevertheless I have always being an avid follower of the great inspirational progressive, radical, pacifist, non-sectarian, communal feminist figure known as Jesus Christ.
So to all my atheist, pagan, Jewish, Buddhist, Muslim, Christian and Hindi friends may I wish you all a peaceful and joyful Christmas and New Year.
No comments: