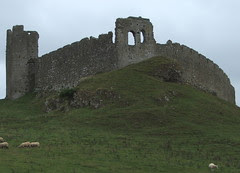 Just over 80yrs after their arrival from Britain, the Anglo-Norman lords had covered much of the country with a network of large stone castles which served as military bases for controlling the indigenous Gaelic population.
None that survive today is more imposing than Castle Roche commenced by Lady Roche de la Verdun (France) in circa 1246. Its prominent high location meant that no-one could move for miles during daylight without being spotted by the soldiers positioned on its battlements.
The castle was located near Gaelic lands bordering the main Norman colonies of Leinster