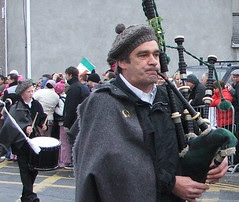 Galway City Pipe Band
A recent welcome edition to the cultural life of the city is the Galway City Pipe Band.
The city's previous pipe band had sadly folded up a number of years ago. But a group of enthusiasts got together a few months ago and rehearsed sufficently well to be able to take part in this year's St. Patrick Day parade.
They sounded great! But their costumes leave a lot to be desired. While the grey woolen caps and shawls are nice, no piper looks complete without a kilt!
I noticed one of the members was a red-haired Scottish lad who used to busk a lot on Shop Street. A few years ago, I got him to play his pipes and lead a silent march of over 1,000 people through the city centre demonstating against the proposed building of a waste incinerator. (we stopped its construction!)

I had no idea the Paddy Parade had such a variety of presentations !!
It must be a truty beautiful event that i hope someday i´ll be seeing!
Even tough you said it´s not as good as it used to be, im sure it would move me into tears.
Thanks for sharing with us !

Hi !
Sorry because of my english wich is very poor, I haven't spoken english since 5 years !
I'm surely going to live in Galway next year (as an Erasmus student).
So is there a pipeband in Galway ? Is there other ones in other cities not far from Galway ?
I'm studiyng bigpipe in a bagad (in Britanny) since 6 years, I'm not very "abble" but I don't want to stop playing if I go away, so I would like to met with other pipers, to learnirish (pe scotish) music in a diferent way !
any body may respont to me at : riwa.kers@hotmail.fr
Thanks for responting me,
Riwanon.

I would like to contact the piper with the red hair. His name is ally. He travelled with my group of Tartan army fans to Rome by van in 93. Is he still busking in galway?

Greetings Graeme,
Ally was superb and we had him once lead a silent (except for the piping!) protest march through the streets of Galway. It was great!
I actually have not seen him in Galway for quite some time. Sadly, the Galway Pipe Band may also have disbanded as it is a few years since I saw them perform publicly. But I am ‘cc-ing’ this message to James Harrold, Arts Officers for Galway City Council, who would have an awareness of the individuals involved in the cultural world locally and may be able to help you in your quest.

Just a quick message with an idea to introduce a pipeband into the Galway area. Currently as far as i am aware there is no pipeband in Galway. My plan is to approach different schools and see what kind of reaction and interest there would be.

I am currently studying a Masters of Education from the University of Limerick and have had one School Placement already in Galway and have another one in September. I am from Achill in Co Mayo. Achill Island has a very strong tradition of piping and has recently put Achill on the map in the piping world.
My aim is to do something similar in the Galway area. Teach/instruct and also form a new pipe band in the Galway area for all ages to improve their piping skills, and eventually to compete in competitions around Ireland and the UK. This will also give students that play various musical instruments opportunity to try their hand at piping or drumming!

Please email if there is any interest. My email is achill.piper@gmail.com