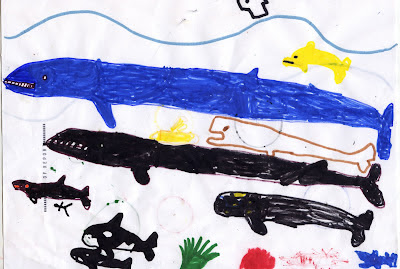 1) Iceland's commercial hunt will kill fewer whales than the USA, Russia and Greenland. Of all the whaling nations, only St. Vincent and the Grenadines is killing less.

2) The experience in Japan is that when supply of whale meat has increased, consumption has increased as well. I'm not convinced that Icelanders wouldn't be interested in eating whale meat. I read that the whale meat from Iceland's scientific research programme was all sold in 2005. If it can't be sold, it most probably could be in Japan, if the authorities agree to permit this trade.

3) Resuming whaling on a sustainable basis is a perfectly rational way of developing Iceland's economy. It may not be *needed*, but one can say that about a lot of activities. Chocolate factories are not required either.

4) All animals are beautiful and remarkable in their own individual way. What makes whales so special? The people of Alaska and Greenland don't need whale meat either - if required they could import food from other parts of the world.

6) The signal Iceland is sending to other nations worldwide is that it is commited to the principle of sustainable development through the sustainable use of it's natural resources. If all nations of the world applied these same principles to their own natural resources the world would be in fantastic shape. Problems conserving biodiversity in some parts of the world does not preclude Iceland from conservatively utilising their own resources.

7) Iceland is leading by example. Iceland is not killing unsustainable numbers of whales - it is killing very limited conservative numbers. Other nations with an interest in whale resources will likely take heed. If other nations do wish to resume whaling, they follow Iceland's leadership and do so within the IWC, or on a biliteral basis with other nations also utilising the same whale resources, if the IWC fails to provide the necessary co-operative forum.

8) Many of the new members to the IWC are developing nations who were in the past unable to participate because of an inequitable fee structure, which would see some small island nations paying the same level of fees as large developed nations such as France. Small island nations are dependant on the principle of sustainable use of natural resources more than most, and some have been concerned by attempts at the IWC of developed nations to expand the IWC's mandate to cover not only large migratory whale species, but also smaller more regional cetacean species which are often utilised as food. For example, cetaceans are utilised as food in the Solomon Islands, the Marshall Islands, and most of the Caribbean members of the IWC. They have feared that, under pressure from animal welfare and rights groups, the governments of rich developed nations may pander to that small sector of their own societies at no political cost, at the expense of the interests of developing nations for whom sustainable use of natural resources is an important opportunity for their development.

Furthermore, the anti-whaling camp of the IWC consists of 7 land-locked European nations who obviously have nothing to do with whales and thus clearly wouldn't have the first clue about how to sustainably utilise them. Switzerland for example joined the IWC in the early 1980's. Only 2 land-locked nations have been recruited to the sustainable use camp, and this has only come about recently in response to the recruitment of land-locked European members.

I have already replied to pro-whale killing comments from David in the comments sections of my other article on Iceland's renewed whale hunting.
But his views here should not go unanswered.
1. David says"...Iceland's commercial hunt will kill fewer whales than the USA, Russia and Greenland..."
Sorry David, but you fail to understand the difference between whale killing by small native village communities for local consumption and the demand by Japan and its cohorts for large scale commercial exploitation.
2. "...when supply of whale meat has increased, consumption has increased as well..."
Yes, fantastic- why not start slaughtering African apes and start putting them on the menus of European and American restaurant? I'm sure that you could create a market for jungle meat.

3. "...Resuming whaling on a sustainable basis is a perfectly rational way of developing Iceland's economy. It may not be *needed*, but..."
It certainly is not 'rational' to me. Iceland's economy is getting on fine without whale hunting.

4. "...All animals are beautiful and remarkable in their own individual way. What makes whales so special?..."
Well, when you see up close the majestic motions of a whale as it moves through the waters, then you appreciate why the creature is so special. It is truly an awesome experience that makes someone mile me think that there is a God out there after all!
5. "...The people of Alaska and Greenland don't need whale meat either - if required they could import food from other parts of the world..."
Of course, such a move would be great news for multi-national food corporations.
Some of us believe though that, with higher carbon emissions caused by ever increasing global travel amongst other reasons, there is an increased awareness of the need for growing local produce - it would make good economic sense, help local areas and lessen the overbearing clout of the big food companies.
Of course I would prefer it Inuits etc did not eat whale meat. But in their environment, the choices ahv been limited for millenia.
6. "...any of the new members to the IWC are developing nations who were in the past unable to participate because of an inequitable fee structure..."
Somehow I don't think that 'fees' are an issue! Many countries have expressed concern about the obvious blatant efforts of Japan to use its economic power on individual small nations to get them to join the IWC as its puppets.
7. "...Furthermore, the anti-whaling camp of the IWC consists of 7 land-locked European nations..."
The anti-whaling camp is led by countries such as the USA, Britain, France etc, which are certainly not land-locked!

Thanks for visiting my blog and posting your comments there as well. I posted replies to them here, if you care to read them.