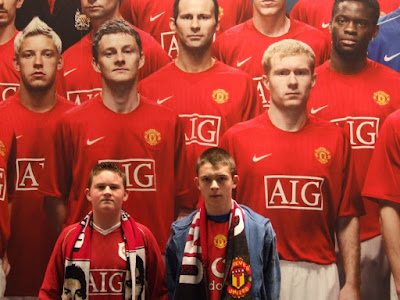 Photo: Shane & Martin lining out with the Manchester Utd Squad

My spirit surged with a feeling of patriotic pride when I entered the grounds of Old Trafford to watch Manchester United play Lyon in the Champions League earlier this year. For all around me the strong sounds of Irish accents emanated from the huge throng of fans filling up the stadium; two RTE sports commentators were prominently positioned with their crew on the pitch prior to kick-off; Irish flags and memorabilia dotted the landscape.
I noticed too that the ‘prawn sandwich’ brigade of the skyward corporate suites, so derided by Roy Keane towards the end of his playing days, contained a fair sprinkling of ostentatiously-dressed wealthy Irish businessmen. 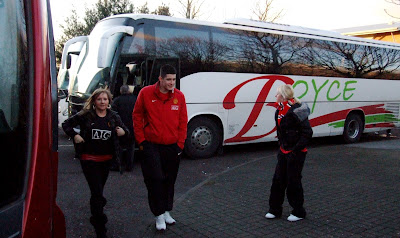 Just before I entered the stadium, I counted 17 parked buses (photo above) in a row with Irish number plates and noticed stalls selling fused Irish-Man Utd 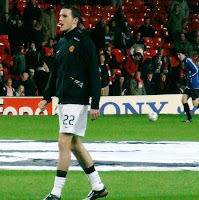 themed scarves.
On the pitch there was John O’Shea(photo) and a hero-worshipped Wayne Rooney ( photo below) who would not look out of place on a Gaelic football pitch in Connemara such are his strong physical Celtic features. 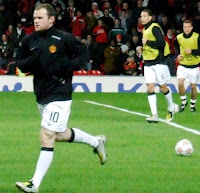 There is no doubt that Manchester United is unique in holding such a special warm place in Irish hearts. This is particularly so amongst working-class Dubliners where support for a ‘garrison sports’ team from the homeland of the ‘auld enemy’ was never undermined by long periods of nationalist struggle against the foreign occupier, eventual southern independence from Britain, the GAA ban on foreign sports or the general latent antipathy of the Irish Catholic Church towards what many priests perceived as an English Protestant game.

RTE (Irish Television) in action on the pitch! 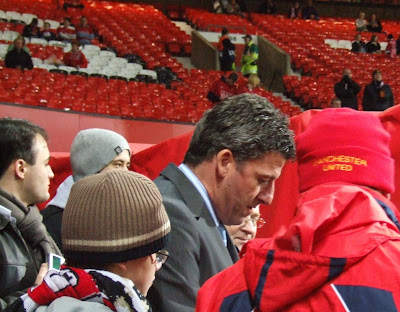 Photo: The English-born former Republic of Ireland captain Andy Townsend signing autographs. Andy was at the match in his capacity as a ITV sports pundit

As I traveled over to the match on the Dublin-Hollyhead ‘Oscar Wilde’ ferry boat with my son Shane and his friend Martin one could see the near-religious adoration towards the Red Devils in the clothing, faces and ages of the hundreds of fans onboard. Young and old, male and female, fathers and sons happily wore Man United red interlaced with Irish green. Pilgrimages such as this to to the hallowed ground in England is a regular occurrence. 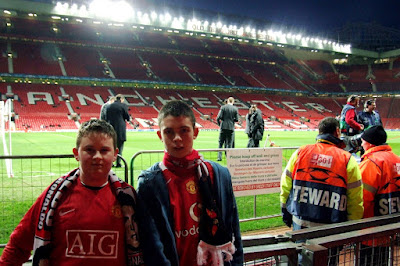 Without the Irish, the atmosphere at Old Trafford would be so much the poorer.
Though it has to be said that the stewards, in their efforts to clean up the terraces, are probably a little too zealous in their sanitization policy as they clamp down (outside the hallowed Stretford end) on the ribald banter traditionally associated with football fans. I saw one quite innocent fan being ejected from the stadium for jumping up and down from his seat singing risqué football songs. 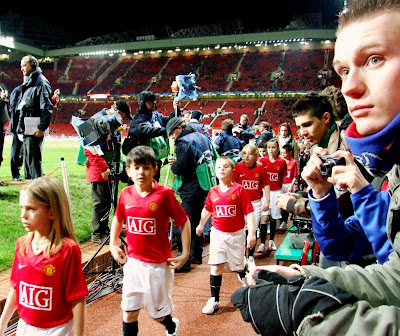 World’s First Industrial City Built by the ‘Paddies’
Manchester still retains a special Irish flavour that is found nowhere else on the British mainland with the notable exception of Glasgow.For the growth of Manchester as the modern world’s first industrial city coincided with the arrival of the emigrant Irish fleeing famine who acted as the workforce for the local textile factories and for the construction of the Industrial Revolution’s great transport infrastructure of railways, canals and roads. It was the 'Paddies' who were primarily responsible for building Manchester. During the 19th century, upwards of 25% of the population of this mushrooming city were Irish.
Paid pittance, they lived primarily in the overcrowded disease-infested urban ghettos known as ‘Little Ireland’ and ‘Irishtown’.

The reaction of the local English inhabitants was initially one of hostility and it was in Manchester in 1807 that the first branch of the Grand Order of the Orange Order on mainland Britain was founded to fight the supposed threat from ‘dirty, treacherous , simian, Irish papists’ to the superior white British Protestant civilized way of life. With the Tory Party and aristocratic establishment strongly allied to Orange Unionism, it was not surprising that the Catholic Irish actively flocked to the standards of the Chartists and later the Labour Party who spearheaded the campaign for increased rights for the downtrodden working class. Yet over time the Irish in Britain, while being active in politics, tended to hide their Irish identity as many felt that their advancement in their new homeland would be curtailed if they promoted the cause of Irish nationalism.

Promoting an 'English Identity'
Ironically this assimilation into English society was promoted by the main organization that the majority of the Irish emigrants trusted, namely the Catholic Church. Though the church did Trojan work looking after the spiritual and social needs of the Irish, many of its native hierarchy wanted to ensure that it maintained its indigenous ambiance and made every effort to have the newcomers become first and foremost ‘English Catholics’. Of course they could not totally kill off support for Irish separatism. In fact it was in this northern city that one of the most famous episodes in Irish republicanism mythology occurred- the Manchester Martyrs. The hanging of 3 Fenians in 1867 for the accidental killing of a policeman during a successful operation to free their leaders from a prison van led to the immortalisation of the words of Edward Meagher Condon one of the prisoners when, after he was sentenced to death by the court, stated "I have nothing to regret, or to retract. I can only say God Save Ireland.”
The song ‘God Save Ireland’ written by Peader Kearney became the anthem of Irish republicanism until the adoption of Amhrán na bhFiann by the Irish Free State in 1926.
It was to Manchester that Eamon de Valera, President of Sinn Féin, was taken to stay with Irish republicans amongst the local population after he and others were sprung by the IRA from Lincoln Prison in February 1919 during the War of Independence before secretively returning to Ireland.
So there was always a hard core of dedicated volunteers in the city that promoted Gaelic sports, music, nationalism and traditions in Manchester.
But they were too often swimming against the tide with many wanting to adopt lock, stock and barrel the key characteristics of the majority population. For some, Ireland was too closely identified with poverty, ruralism, backwardness and a lack of modernity. For others it was a sense of bitterness towards Ireland for forcing them to leave family and friends behind to endure a life of loneliness in order to eke out an existence of sorts in a foreign and often hostile land.
Oddly enough, a song written by an English Communist Manchurian of Scottish extraction about a district in Manchester became one of the most famous 'Irish' traditional ballads of all time. Ewan McColl wrote Dirty Old Town about his native Salford. But it secured such international status when it was covered by the Dubliners in the 1960s that its lyrics were deemed to refer to Dublin.

British & 'British Irish' Contribution to the Recent Global Popularity of 'Irishness'
From the early 1980s though, there was a marked revival in Gaelic culture amongst the young Manchester-Irish as a counter-reaction to the demonization of the Irish during the emergence of the ‘Troubles’ in Northern Ireland particularly during the period of the Hunger Strikers, the rise of radical Sinn Fein and the harshness of special legislation such as the Prevention of Terrorism Act towards the Catholic Irish community. This was strengthened by the growing global popularity of English-Irish bands with their Celtic sounds such as the Pogues; the Irish soccer team with its English-Irish soccer players (John Aldridge, Mick McCarthy, Andy Townsend etc) led by an Englishman Jack Charlton and the phenomena of the Irish-American inspired Riverdance with its attractive sensual Irish dancing. Yet it was courageous English political activists such as Gareth Pierce, Tony Benn, Clare Short, Chris Mullen and notably Ken Livingstone (from his time as head of the Greater London Council {GLC} onwards) that acted as prime catalysts in the Irish in England, particularly the young and the more recent arrivals, throwing off what seemed to be a self-imposed collective ‘badge of shame’. 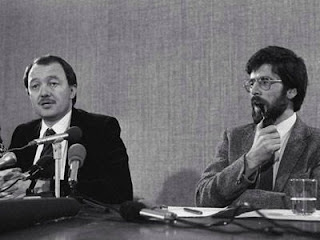 The mid 1990s saw massive progress on the 'Irish Question'. A new Labour government under Tony Blair (himself the son of a Donegal woman) finally had the tenacity to end the conflict in Northern Ireland by convincing Unionism to accept that the days of 'No Surrender' and a Loyalist monopoly were over. The great Mo Mowlan, as Secretary of State for Northern Ireland, emerged as a hero in this historical settlement.
Combined with Blair's official apology on behalf of Britain to Ireland for the deaths and miseries associated with the Great Famine, a new chapter opened up between both countries.
After centuries of suspicion and characterisation in some channels as almost sub-human psychopaths, it was suddenly cool to be Irish in Britain.
However the record of successive Irish governments from 1921 towards their countrymen and women living in England amounted to little more than verbal tokenism. The ongoing requests in helping to empower them in looking after their own special social, recreational and health needs went largely unanswered. They failed to recognize and honour the vital contribution of these emigrants to the homeland. For it was their regular postal payments back home that provided many households in Ireland with the bare necessities of life. 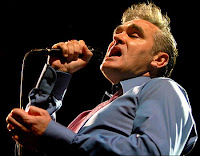 This new pride in their Celtic identity amongst second
generation Irish is most noticeable amongst those who became mainstream popular artists in Britain during the 1980s-1990s.
In Manchester this included Noel and Liam Gallagher of Oasis, the comedian Caroline Ahern and the Smiths.Former Smiths lead singer Morrissey brought out in 2004 a highly acclaimed song whose title and lyrics encapsulates his dual English and Irish heritage. Entitled ‘English Heart, Irish Blood’, its politically overt lyrics denounces Oliver Cromwell, the Tory and the Labour Parties.
See also my article on George Bernard Shaw's sarcastic quotation on the definition of Patriotism

Note: Many thanks to the Manchester Irish.com website with its Manchester's Irish Story
Plus! Check out the website for Irish supporters of Manchester United at www.irishreddevils.com

As a Manchester born man of Irish patents I fully agree with this.

Long time no see !
I hope you are well and hows Mike doing

Good to hear from you John! As you say it has been a long time since we have meet. Your message brings back many memories of the live gigs & big bands in Galway. Those were the days- eh!?
Michael sends you his best regards. He is now working as a civil servant & has 2 young sons!
What about yourself? How are you doing? I can't access your blog, so I don't know. But well I hope?

I have just launched a new message board for Irish Man Utd fans,any chance you could plug it..?Here is the Url