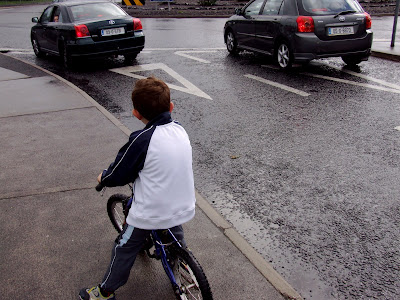 The Loneliness of a Galway Cyclist
I was intrigued at an article in last week's edition of the Galway Independent where the majority of the local councillors from government parties reacted negatively to the new budgetary scheme that gives tax incentives to companies who provide bicycles to their workforce and who made clear their intention not to cycle to work in City Hall.
I too have reservations on the impact that these proposals will have in encouraging people to switch from cars to bikes and I am of the opinion that alternative initiatives could have been adopted to substantially increase cycling and reduce car dependency in order to help solve our traffic crisis and ensure that Galway lives up to its increasingly dubious international status as Ireland’s only ‘Healthy City’.
I can empathise somewhat with Councillor Michael Crowe when he says that the scheme “…is daft...and…is pie in the sky...” He is certainly spot-on when he says that Galway is not cycle friendly.
But surely this sorry state of affairs is due to the councillors’ collective failure to implement their own policies agreed after months and years of public consultation?
For according to the ‘Galway City Development Strategy’ adopted in 2002, Galway is supposed to be a ‘cycle-friendly’ city by 2012 with the development of a 'safe city-wide pedestrian-friendly, cyclist-friendly and child-friendly infrastructure’. In the ‘Galway City Development Plan 2005-2011’, the council agreed to promote cycling as a safe, sustainable and healthy means of transport; commence work immediately on an Integrated Transport Management Plan that would include a city-wide cycling network providing safe routes to places of employment, schools, city-centre and other facilities; facilitate safe and convenient cycle access via the existing road system; overcome the serious difficulties faced by cyclists at roundabouts; and provide a network of city-wide recreational walking and cycling Greenways. 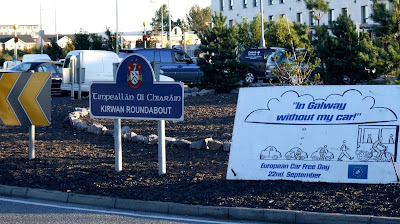 Bumper-to-Bumper Traffic on Car-Free Day in Galway City!
As chairperson of the two local authority and multi-sectoral committees responsible for transport infrastructure in Galway, the onus is on Councillor Crowe to ensure that these policies become realities. Sadly few if any of these objectives have been implemented making the city more anti-cycling than it was when the present council came into office in summer 2004.
Why is a Cycle Lane Not a Cycle Lane? When it is in Galway
Under the watch of this council, what passed as tarmacadam cycle lanes in many parts of the city (inadequate though they may be) arbitrarily lost their cycling identity, often being reduced in size, dug up and covered in metal fencing with no corresponding expansion of the roads to accommodate cyclists .
So rather than derisively ignore the new government scheme councillors, in the few months that they have left in office, should create the roads infrastructure necessary to make the proposals work.

Hi,
This is rather irrelevant to your post, but commenting on your latest post seemed the easiest way to contact you. I was wondering if you know how the Brazilian community in Gort is doing at the moment? I'm writing an article on the subject for my journalism class, but so far everyone I contacted was rather reluctant to talk about it. It appears to me that the community is somewhat falling apart and that there are quite some people without a job since Duffy's closed down. Is this true? If you would have any information you wouldn't mind sharing, could you email it to liesbeth.lemmens@student.ehb.be ? Thank you very much!