The Jollity & 'Irishness' of the Galway Races 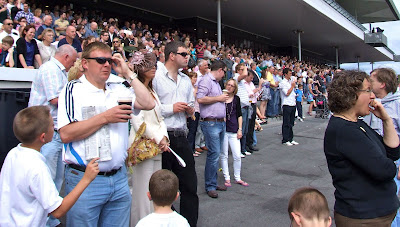 Galway Race Week is probably Ireland's most popular Festival.
It is when the rest of the country seems to pour like a tidal wave into the City of the Tribes to indulge in a 7 day extravaganza of fun, gambling, drinking, frolicking, style, paddywackery & networking.
But most of this is undertaken with a nice bit of humour and in good taste. 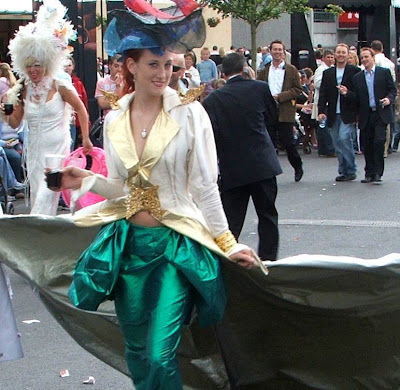 During the Celtic Tiger years, 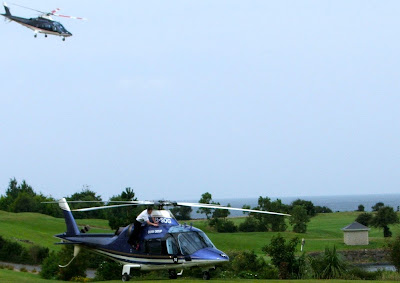 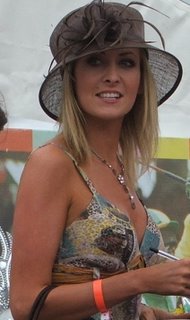 Race Week was when helicopters descended on the city like a swarm of locusts; when the very latest BMW & Mercs populated the hotel carparks; when restaurants and bars were bursting at the seams; when pink champagne flowed like tap-water; when high class prostitutes turned tricks in city centre apartments & when all-night card games offered pots of six figure sums. It was the annual occasion for the Irish nouveau riche to publicly display their new found wealth with the arrogant vulgarity and pomp that was their trademark. 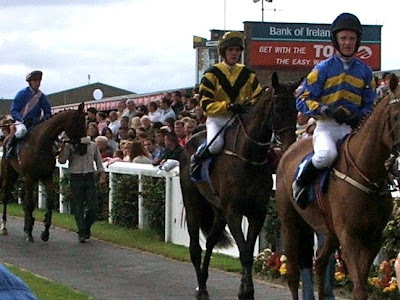 The real Stars of the Festival
The state's traditional ruling political elite –Fianna Fáil (FF)- erected a special tent at the racing festival where the captains and kings of business, banking and industry dressed in all their regalia came to pay homage, to socialise and to be seen with 'King' Bertie 1 a.k.a. An Taoiseach (prime minister).
‘Pay’ being the operative word as it was 350Euro for a meal & seat in this regal tent! 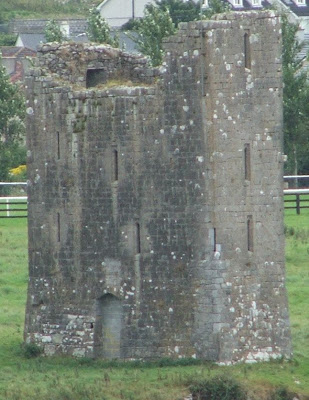 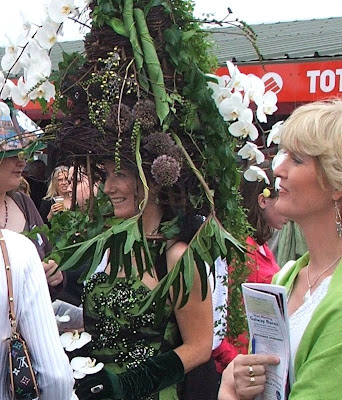 A People's Festival
Yet like any good medieval gathering, there was and still is an opportunity for the ordinary folk to partake of the merriment and largesse.
So don’t believe for one minute that the Race city is a playground only for the rich and famous. 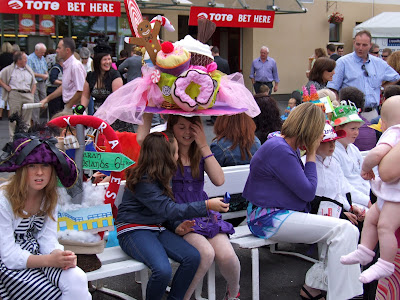 Young 'Mad Hatters'
Though the event was founded by the Anglo-Irish gentry and merchant elite of Galway city, nevertheless it has taken on a strong People's Festival identity, an amazing egalitarian extravaganza when-for one week only-the ordinary office worker rubs shoulders with aristocracy, priests, farmers, hookers, politicians, beggars, tourists and billionaires. And there is something for all ages- from betting offices, bars, restaurants to fairground attractions. 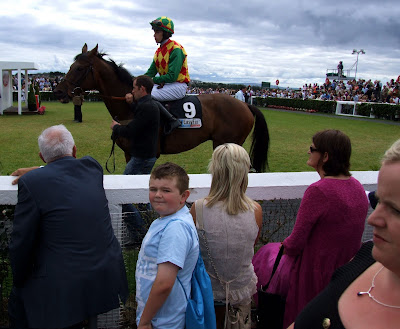 The Irish too have a special affinity with the horse and horse racing which reach far beyond the medieval period.
So while the festival was only founded as late as 1869, nevertheless its cultural antecedents pre-date even the Celtic epoch and hark back to the earliest Neolithic times when all members of a tribe or tribal confederation would gather together on one sacred location for a celebration of life combining worship with sport, competitions and entertainment for all peoples and all classes. 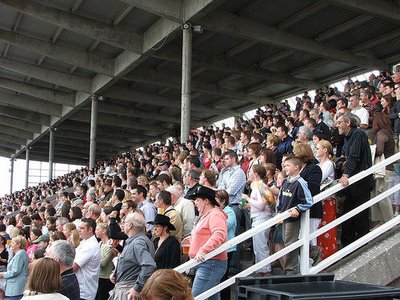 Of course, the demise of the Celtic Tiger has dampened the spirit of the occasion somewhat. The FF Tent has disappeared from the landscape; the ostentatious trappings of the property speculators is not as garishly on show to the same extent; helicopters seem to have become an endangered species as these noisy flying beasts are now much fewer in the skies over Galway; many local hotel rooms lie empty as ordinary visitors refuse to pay the outlandish prices that their owners stupidly still demand. 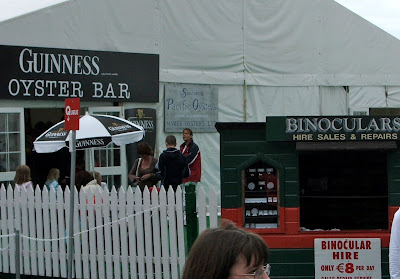 Yet the numbers of visitors remain more or less the same, though their spending has diminished. Interestingly, the crowds have over the last few years become much younger and sadly more drunker. For the first time in my years enjoying the jollity of the Festival, I experienced at first hand a darker side of the Week's festivities when I was violently accosted by a bunch of highly intoxicated well dressed young teenagers when I asked them to desist from littering a parkland and frightening others from enjoying the beauty of an area. Talking to friends, I found that this occurrence was sadly not an isolated incident. It is symptomatic of an Irish society that is suffering from a binge drinking malaise perpetrated by the greedy me fein philosophy of the 'boom years'.
But I still believe that these anti-social elements are a minority with most people out to enjoy themselves without wanting to negatively impinge on others. 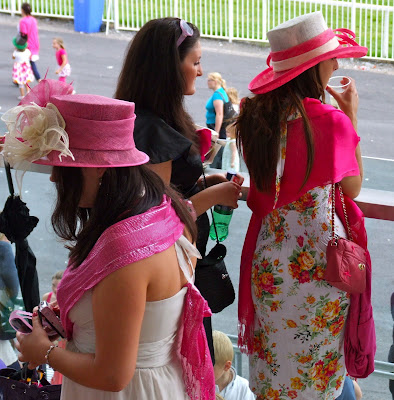 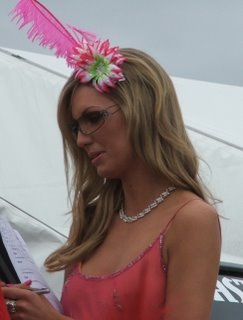 their most beautiful finery to be praised and ogled.

From early in the morning, large groups of classy garbed females wait at bus stops all over the city on their way to the race course.
Amazingly once the event ends, hordes of girls in the most expensive dresses just take off their high heels and walk the miles back to their city centre hostelries and hotels. There is something so refreshing about this attitude. People may dress up in fantastic clothing for the festival, but most are still just ordinary 'down to earth' folk underneath. 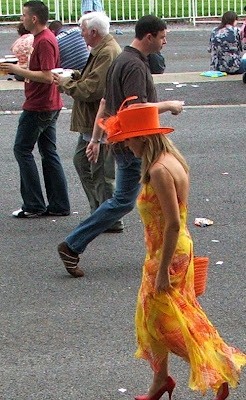 'All the Fun of the Fair' 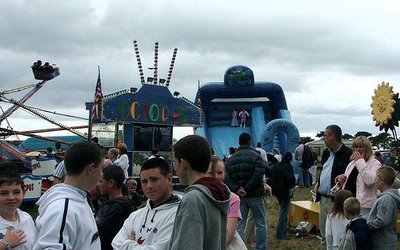 There is nothing like the age-old excitement of a Fair with fairground attractions for a younger generation to enjoy. But this one needs a serious revamp. Some of the equipment has seen better days & seems to be in a bad state of repair.
Furthermore, a few of the Funfair's attendants could also benefit from a course in customer relationships! This area seems to reek of staleness and inertia.
The children deserve better. 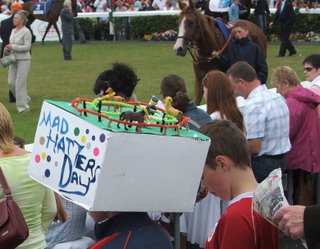 One of the funniest events takes place on Sunday when girls and women (& a few men) wear "Crazy Hats'. The craftsmanship and time that people put into their headgear is absolutely fantastic. Fully fledged farm, stables and race tracks are recreated in the most detailed miniature to sit precariously on the top of people's heads! 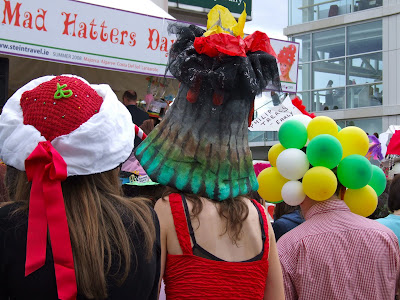 Not only that, others create the most outrageous full length costumes to match their garish hats.
For hours these ostentatious individuals walk and mingle with the crowds before gathering together for the awards ceremony. 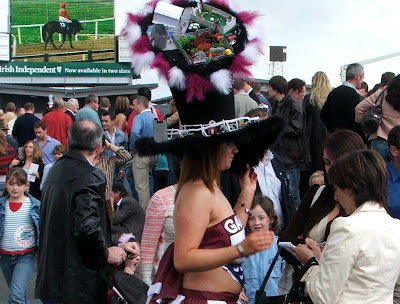 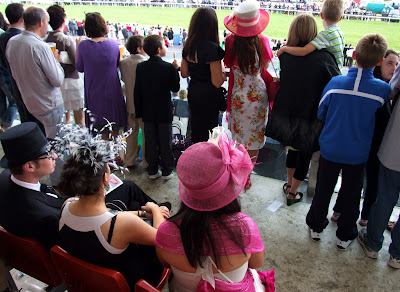 There is nothing else quite like the Galway Races on this planet! 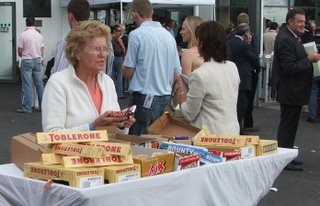 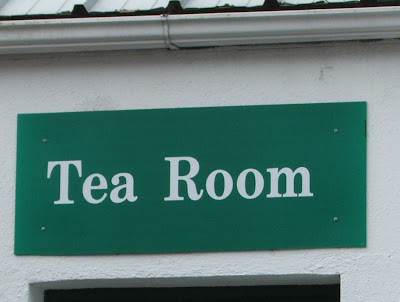