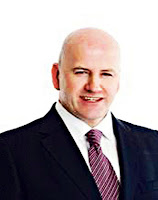 Cracking Presidential Debate on Frontline last night!
Martin McGuinness played a blinder exposing Sean Gallagher as representing the worse excesses of FF cronyism. Organising political party fundraisers with a €5,000 entry fee in return for an 'audience' with the Taioseach/Prime Minster of the country (are meeting with the leader of Ireland only available to the wealthy?), going to a wealthy business person's home to collect a monied envelope, receiving a huge director's loan (to avoid tax) & admitting he was an admirer of the unpatriotic tax exile Denis O'Brien who was condemning by a judicial review as having corrupted the Irish political system.
Combined with the fact that Gallagher was a member of the FF National Executive, refused to condemn the last government for their incompetency and a big property owner with a business customer base amongst big builders shows he was part of the FF-property speculator-financial elite that siphoned off our taxes over many decades to fund their rich lifestyles, who bankrupt the country, who destroyed so many of our livelihoods and whose 'old boys network' policies led to a mass emigration of our brightest and best.
He certainly was not an ordinary honest decent rank and file member of the party as he has tried to portray so many times.
If he gets elected, it will be a victory for a discredited immoral 'me-fein' establishment.

A Vote for Gallagher is a vote for Those that Stole Our Hard-Earned Monies & Robbed Us & Our Children of a Future!