The video of the leader of the Islamic fundamentalist Omar al-Farouq Brigade cutting out and biting the heart of a Syrian soldier shows that the Syria opposition contains a significant evil force that is a threat to peoples and communities all across the Middle East.
See Independent newspaper article here 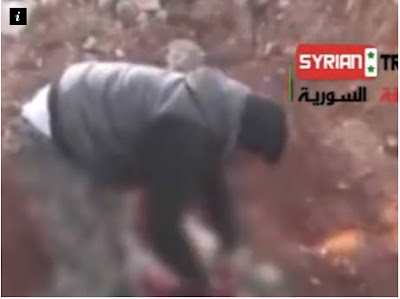 My fear is that Western intervention will only encourage these elements as shown in Iraq, Afghanistan and Libya with 200,000 deaths, ethnic cleansing, millions of refugees, destruction of minorities, loss of female equality, establishment of warlord fiefdoms, Jewish colonisation of the West Bank and  a rise in Islamic fundamentalism that is built on hate. To hear the comrades of Abu Sakkar cheer his actions with "Allahu akbar (God is great) clearly shows the madness of this religious zealots.
See my previous article on the destruction of the 2,000 year old Christian communities in the Middle East.