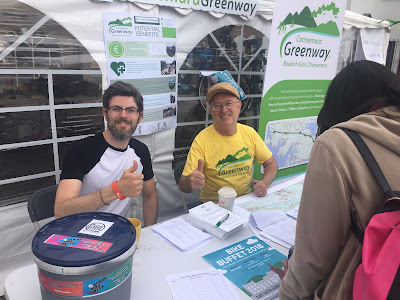 It was great to be back on the campaign trail interacting with people on the streets of Galway city, this time with the Connemara Greenway Alliance which is pushing for an amenity that will change the face of tourism in Galway and the western seaboard as well as bring positive economic, social, community, health and environmental benefits to its people.
The Connemara Greenway, which is to be developed along the abandoned 77km railway line from Galway city to Clifden, will allow visitors for the first time in the era of motorised transport to safely walk and cycle through one of Ireland’s most famous landscapes.
I was so impressed with the enthusiastic support from the public at our Saturday stand at the Spanish Arch. People were lining up to sign the Greenway petition with comments such as a “win win for all” and “long overdue” being uttered time and time again.
Whilst Galway County Council opened the first completed section of the proposed Greenway a few weeks ago, a 6km section at Ballinahinch-Ballinafad and planning permission has been obtained for the Clifden to Oughterard section, nevertheless the political momentum needs to be increased to ensure progress especially along the Moycullen to Galway city if the Greenway is to completed over the next few years.
Support though in Connemara is growing and our Alliance includes the Moycullen Community Development Association, the Connemara Chamber of Commerce, the MaumTurk walking club and families and landowners living along the route
For there is a growing realisation that Connemara will not only benefit from tourists travelling from outside Galway and from overseas seeking to experience a Greenway that is located in a region of beautiful landscapes and rich cultural heritage known throughout the world, it will finally be able to exploit a large untapped market that exists on its doorstep, namely the circa 80,000 urban population of Galway city. However it is not only an amenity for tourists. Connemara folk will be able to commute to and from the city, meet neighbours and enjoy their own locality.
To get an inkling of what the landscapes of Galway can bring to leisurely cycling, why not join me tomorrow (Sunday) at 9.30am at the Plots on the Dyke Road to take part in the Seven Galway Castles & Organic Gardens Heritage Cycle Tour. Check out https://bit.ly/2Mwlx0L