It is Red Letter Day for our Green Spaces! Councillors -Please Support the Motion to Set up a City Parks’ Wardens Unit 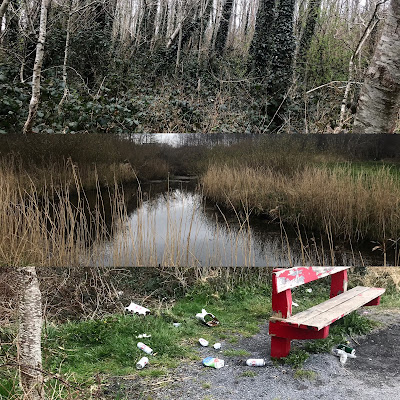 Photo shows the Beauty & Ugliness of Terryland Forest Park on a Sunday in March 2021:
A motion from Councillor Imelda Byrne, which has been on the city council agenda since last January, to establish a permanent on-the-grounds seven days a week wardens/rangers unit for our city parks will hopefully be finally discussed at today’s meeting of city councillors.
It is important that all city councillors support this motion for the sake of our parks, our people and our biodiversity.
It is long overdue that such a unit was established.
The city’s parks were a godsend during COVID for so many of our citizens. As per the ambition of the Galway National Park City initiative that is supported by such a broad strata of society, green and blue spaces need to be integrated into the fabric of cities.
But we need the resources and investment to ensure that they are safe and of high maintenance for the benefit of the public and for enhancing urban biodiversity. Sadly this is not the case at present with litter, anti-social drinking, vandalism and broken furniture too often symptomatic of our green spaces. The limitations placed on volunteer activity organising regular group litter pick-ups etc since March 2020 has only made a bad situation worse.
In so many other cities such as Dublin and across Europe, there are full-time wardens in public parks to ensure overnight litter is removed early every morning, that repairs and graffiti removal are quickly carried out etc. By their very presence, wardens also act as a deterrent to anti social elements that use and damage our precious green spaces.
There is only one warden in Galway city's public parks who took up her duties early last year. She is top class and does an awesome job in Terryland Forest Park and elsewhere. Yet she is only there for circa half a week as she has other duties to take responsibility for. Furthermore, neither she or anybody else is on duty at weekends when so much damage is done. The other parks personnel are also brilliant hardworking people that love their work and do so much good. But there are very few in number and have to cover all of the city’s parks and green spaces.
At the very least Galway’s three main parks need full time on-the-ground staff (park wardens/rangers) 7 days a week as otherwise broken fences, broken seating, graffiti, rubbish can be left on location for long periods. With this present situation exacerbated by the presence of drinkers etc, people can understandably be turned off visiting the parks at the very time when medical science is telling us of their importance to human and planetary health.
Furthermore, the wardens' terms of reference must include not just litter picking, providing information to visitors but also repairing fencing, planting trees, paths upkeep etc.
A few weeks ago the government offered Galway City Council twenty two new staff positions for the development of walking and cycling. Should City Hall not take some of these personnel and assign them to the parks in order to design, development and maintenance of natural walking trails and walking/cycling path routes?
Why No Permanent Bins at Park Entrances?
Last September, as a community (GCCN) representative on the Special Policy Committee of Galway City Council dealing with Climate Change, Environment, Recreational and Amenity I proposed a motion, based on my experiences of the parks in other parts of Ireland such as Dundalk, that large permanent applicable park bins, supported by information signage and that are regularly emptied, be placed at the entrance to all three main parks as an alternative to the plastic bags that are presently pinned to benches-which though they do indeed help in keeping parks clean- sadly are ugly, flimsy and tend to tear easily. This was supported by all community reps and indeed all other members. Officials told us at the follow up meeting in early December that these bins would be in place by Christmas. Sadly this has not happened and members have not being given an explanation why this is the case, even though we asked.
Anti-social elements above prosecution?
It is disgraceful and an insult to the citizens of Galway that at least up until a few weeks ago some individuals who did so much damage to Terryland Forest Park in December-January by ripping up and burning fences, gates and trees, destroying paths, lighting fires and covering large swathes with rubbish subsequently walked through this very same park with impunity.
I have asked An Garda Síochána and Galway City Council, who were so helpful during the period of destruction(especially Sgt. Browne, parks staff & cllr Niall McNelis), to issue a barring order preventing them from entering this taxpayer funded facility. I am told that this is not practically possible under present legislation.
I and others cannot and should not accept such a situation and have requested that an action group be set up consisting of community reps, Garda, city parks personnel and other appropriate agencies to look at coordinating the protection our parks. After all the law should be there to protect the common good and public facilities from those that seek to destroy it.