In a Country Graveyard 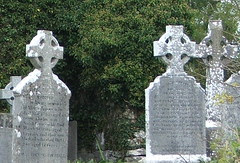 In a Country Graveyard
Originally uploaded by Speedie1.
Yesterday I helped bury the aunt of my wife Cepta.
For me Kathleen's funeral, though a sad occasion, was strangely enough a very invigorating and illuminating one. It demonstrated what was best in an Ireland that is fast disappearing as it becomes engulfed by a tidal wave of rapid social change.

The funeral took place in a little parish church near the village of Monivea in east Galway.
Kathleen was a very lovely person full of wit and charm. But she was still just an ordinary person with no political or economic clout. Yet her death was seen as a loss, not just for her blood relatives, but for the whole community for miles around. Friends, neighbours and cousins( many of whom who had travelled from all over Ireland) gathered together at the little church to give due recognition to the passing of one of their own.
It was truely touching. 5 priests officiated at the mass.
The night before, her body was laid out in an open coffin and, as is the custom in rural Ireland, locally-based government ministers and politicians came to pay their final respects.
In no other developed country that I know off, nor in fast growing urban Ireland, is this tradition in existence. Since independance, attendance at funerals is a critical aspect of the life of country politicians- it is high up in on their 'must-do' priorities. This shaking of many mourners' hands might be sneered at by some as pure political opportunism. It is probably so in many cases. But it is still uniquely Irish (& 'nice'!) that these high-powered people feel it is important to be there with individual constituents when personal tragedy calls. It gives ordinary families a sense of importance and of belonging.

The Mass had many other quintessentially Irish features- the presence of so many priests; the procession of simple gifts that symbolised the life of the deceased (a garden plant, home-baked bread); the heartfelt eulogy (by cepta), the responsorial psalm readings by the child relatives; the singing of traditional heart-rendering hymns; the cortege led by bouquet bearers and family members; the mourners dressed in black; the throwing of clay onto the coffin as it was lowered into the grave accompanied by the prayer with the immortal words "....from dust though came...to dust though shall return..."; the dinner that followed where all attendees relaxed, unwinded and promised (more in hope than in expectation) that '...Yes, we must get together real soon..."!