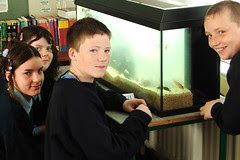 Marine Aquarium in a School Classroom, Connemara
Originally uploaded by Speedie1.
One of the most interesting projects within Fionn was what I called 'Galway Bay in the Classroom'. With funding from the ever-supportive Marie Mannion of Galway County Council's Heritage Office and the expertise of Ireland's National Aquarium, (Atlantaquaria), I had aquariums installed in six Galway schools.
But these were not your usual 'run-of-the-mill' fresh-water tropical fish tanks. Rather the units were populated by a cross section of the marine life that inhabits Galway Bay.
The project allowed children to see at first hand a complete marine world within the confines of their classroom. We wanted pupils to develop an increased awareness of their own local marine heritage through observing how different marine species interact with each other and with their surrounding environment. They gradually learnt that each animal type has an important part to play in maintaining an eco-system. For instance, they could understand the role of crabs in cleaning up the waste produced from other creatures and the camouflage effects that some fish use to avoid detection by their prey and so keep their species from becoming extinct.
Furthermore, the children had themselves to interact with the tank carrying out specific tasks regularly e.g. - changing 20% of the sea-water every 3 weeks; feeding the creatures daily as well as monitoring their progress
Everyone associated with the project came to appreciate the amazing diverse range of wildlife that exists right beside us in the waters of Galway Bay including mullets, wrasse, butter fish, hermit crab, shore crab and starfish. These marine animals became wonderful additions to Galway school classrooms over the last eight months.