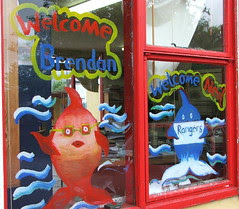 My Fish Face!
Originally uploaded by Speedie1.
But it is with schools, particularly through the 'Fionn' Primary School Science Project, that I devoted most of my working life over the last four years. Since January 2002, I have coordinated the award winning Galway 'Fionn' Primary School Science Project on behalf of the Galway Science & Technology Board.
'Fionn' provided 35 Galway primary schools with the equipment and training necessary to produce their own Science film. This government scheme was set up to facilitate the introduction of Science into the country's educational sector. A herculean undertaking to say the least! But necessary as there has been an alarming fall-off in students studying science at third-level colleges which will ultimately undermine the nation's development as a high-tech/R & D-based economy.

'Fionn' had a number of inherent innovative principles that contributed to its outstanding success:
The ability to take a boring and oftentimes difficult subject such as science and present it as something exciting, funny and educative can really only be done by children (or someone with a child's perspective on life). Adults can look at the pen in their hand and see exactly that- 'a pen'. Whereas, kids with their playful imagination and creativity (that older people seem to lose) can transform it into a rocket or a submarine or a comet or…
If you ask second-level or third level students to produce a film on 'buoyancy', you will probably get an end-product that will be professional, highly scientific, extremely informative but possibly very uninspiring. Whereas, I have seen one primary school class make a Fionn movie on the same subject that included a hilarious rendition of the Beatles's song 'Yellow Submarine' by the entire school; a practical demonstration of buoyancy using plastic cola bottles, stones & a glass tank; a visit to a museum; a classroom festooned with drawings of submarines and a powerful interview with a local man who served as a submarine commander in World War Two! Working on the same subject, another school took delivery of a 15foot tree trunk that they transformed, with a few months of hard work, into a fully functioning canoe using the tools and techniques of prehistoric man ('cutting and burning').
The range and the scientific themes covered by Fionn schools has been absolutely amazing- bats in the school attic, lobster fishing, lighthouses, a medieval abbey, fox-hunting, a disused mine, lake pollution, a school oyster farm, teeth…