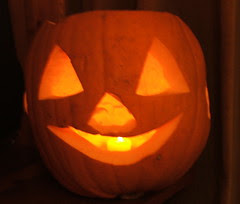 (Sorry dear readers, I should have posted this article early last month. But a heavy work schedule put paid to that. Anyway, better late than never!!)
Today Halloween is celebrated by children across the Western world. But like many other annual family festivals, it has become so commercialised by 'Americanised' popular culture that its true origins and religious aspects have long being forgotten. I have nothing against many of the entertainment and children elements now so symptomatic of events such as Christmas, Easter and Halloween. After all, if they bring a bit of sparkle into the lives of our youth, that can only be welcomed

The Christianisation of Samhain
Many people though associate the origins of Halloween with the Christian festival of 'All Hallows Eve' or 'All Souls Day' when people remembered their dead family members.
But actually, this event was superimposed onto the ancient pagan Celtic festival of 'Samhain' which marked the beginning of winter and the beginning of the Celtic New Year.
Typical of many agricultural societies, the Celts had four major annual festivals based on the cyclical differences experienced in the changing seasons of nature and their corresponding weather patterns. The other three were 'Imbolc' (spring) 'Bealtane' (summer), 'Lugnasa' (harvest).

Antecedents to the Pumpkin & 'Trick or Treat'
But it was also a time when creatures from the supernatural world could enter into the world of mortals. Fairies and the spirits of the dead would walk the earth. Many of these beings were benevolent and the spirits of dead ancestors; so families laid out extra food and set aside a table space for their ghostly visitors. Hence the modern Halloween custom of children dressing up as ghouls and witches, calling door-to-door and receiving presents of apples and nuts when they called. (Such fruits were common in Ireland).
But there were spirits that came on the night of Samhain that were malevolent. Candles were placed in skulls at the entrance to dwellings as light was feared by these dark foreboding creatures. This protection against evil became transformed in modern times into the positioning pumpkins with carved out faces and internal candles at windows and doorways

Irish Bring Halloween to USA
The Irish emigrants of the nineteenth century introduced Halloween and its rituals to America. Within a few decades, the festival was transformed into the fun and games event of today