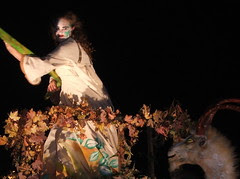 Witch Queen
Originally uploaded by Speedie1.
Celtic Fairy Queen Slays The Horned Ram
Macnas, the internationally-renowned street theatre company, this year organised spectacular night-time community Halloween parades in socially disadvantaged areas of Galway city.
For weeks in advance, local children were enthusiastically learning to play drums, to make costumes and to rehearse their roles as dancers, actors and musicians.
The parade that I participated was in Ballinfoile and involved hundreds of children marching in unison pass or through four different housing estates. There were bands, dance troupes, fireworks and theatre. It ended in an awesome fireworks extravganza as a 20foot high Ram was burnt on a hilltop in an reactment of a mythological Celtic story.
The smiles and laughter on participants and watchers alike was beautiful to behold.
It was a true 'Reclaim the Streets' campaign and give local people a real sense of empowerment.
The only person that was annoyed about the whole activity was my friend Michael McDonnell who lived on the route of the march. Three of his pet birds died from the shock of the exploding fireworks!