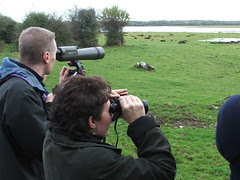 Birdwatching
Originally uploaded by Speedie1.
Birdwatching at Europe's largest Turlough
One of the most enjoyable events that I have attended over the last few years was the bird-watching excursion to Rahasane turlough at Kileeneen(Irish = 'Kileen's little church') in Co. Galway.
Early one Sunday morning, my son Dáire and myself gathered with over 40 enthusiasts to view the enormous range of birdlife that congregate at Rahasane, a lake that is recognised as one of the best examples of a 'turlough' in Europe. A turlough is a feature of limestone landscapes where a freshwater lake can vary enormously in its area from season to season due to the porous natiure of its rock. A heavy rainfall will led to a considerable increase in size; a dry season will inevitably lead to a dramatic reduction.

The nature trip was ably led by Pete Capsey a fellow work colleague from the DERI Institute at the National Universty of Ireland, Galway who personifies the term 'a true English gentleman'.
For the last few years, Pete has,on behalf of Birdwatch Ireland, been voluntarily cataloguing the number and type of avian life that visit Rahasane .
I was shocked to learn from him that some species of birds have declined by 90% since he began his activities. He blames enroachment on the lake by housing development and pollution. There is also the factor of 'Global Warming'.

Life on Earth under Threat
This observation only reinforces my belief that mankind's greed and selfishness is destroying the biodiversity of our planet. If we continue along this path, we will ultimately destroy our own species in the process.
In my little way, I am attempting, by working with other committed individuals though a series of local environmental campaigns, to halt this destructive deathwish. More anon on our eco-initiatives that are based on the 'green' principle of 'Think Global, Act Local'