'The Wind that Shakes the Barley'... A 'Must See' Film for Irish and British people 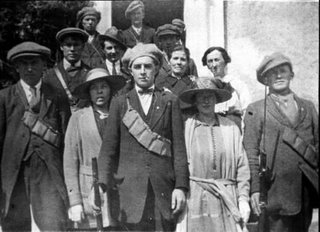 What a film! One of the best and most evocative films that I have ever seen.
The storyline, the production and the acting were first class. The motley group of Iraqi, American and Irish friends that went with me to the movie were emotionally captived by the performances. Huda and my wife Cepta were reduced to tears; my 'green' Irish rebel heart was beating with joy one minute, with anger and sorrow the next. I could see images of my own grandparents and grandcousins in so many of the onscreen roles.

In its portrayal of the 'Irish War on Independence', the 'Wind that Shakes the Barley' brilliantly touched on universal themes that could be placed in any age, in any country across the world that is or was experiencing occupation by a foreign military force. It particularly captured the essential racism and terrorism of all armies of occuption as they try and fight a native guerilla force that is deeply woven into the fabric of a local community. In the film, the British forces carry out classic counter-insurgancy tactics that almost always fail in the end. In response to the successful guerilla campign of the IRA, the British government created what John Walsh of the English 'Independent' newspaper recently called modern Europe's first state-sanctioned terror group. The orders for this army force (the 'Black and Tans')-comprising many criminals and recently released prisoners-was to initiate a reign of pure terror against the civilian population and bludgeon them into submitting to British rule. 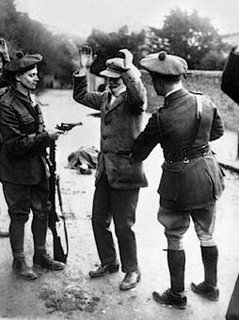 In the film as in real life, they left a trail of death and destruction in their wake- burning streets and houses, shooting innocent civilians, torturing prisoners and carrying out summary executions. Their open racist contempt for the natives was shown in the film not just in their brutality but in their verbal abuse and sneering of the Irish and all things Irish. Their words and actions reminded so much of Israelis' comments this week towards the Lebanese; of American GI language towards the Iraqis and formerly the Vietnamese; of the Turks towards the Kurds; of Bosnian Serbs towards the Muslims; of Russians towards the Chechens; pf Sudanese Arabs towards the Darfur negroes... Yet the British atrocities only had the opposite effect to what the their government had hoped for, with support and recruitment to the Irish republican resistence only increasing.
But the movie also admirably showed the underlying tensions and divisions that existed in the Irish republican movement. The scenes that centred on the debates and arguments over the terms of the Treaty brought back by Michael Collins from London were classic! One of my favourite moments though was when a Irish republican court -operated by an almost exclusive all-female (!) judiciary- awarded in favour of a poor woman who was unable to pay the principle and exhorbant interest for a loan that she had obtained from a wealthy Irish businessman. Priceless! But the next scene then showed an IRA unit going in and forcibly releasing the convicted businessman. Why? Because they needed his money to buy rifles and bullets to fight the British! For already the seeds for the divisions and largely social class conflict of the Irish civil war of 1922 were been sown.

The movie also cast light on many other forgotten aspects of this period of Irish history:
-the prominent role of women in the resistance movement
-the refusal of the Irish railway workers to transport British military personnel and weaponry
-the execution of 'traitors' by the IRA volunteers of men they once called friends
-the excommunication by the Catholic Church bishops of anti-treaty republicans
-the racist attitudes of the landed aristocracy towards the native Irish
-the network of farm houses that provided food and lodgings to the IRA
-the excellent guerilla tactics employed by the IRA
-the high level of IRA weaponry that came from raids on British police barracks

The British 'Independent' reporter John Walsh said of the film, "At last a film that brings the truth to British eyes (of British rule in Ireland)". The same could also be said of Irish eyes. Ken Loach has done a great service to both countries

This is one of my favourite movies as well--and I was not pleased that it got absolutely no attention here in the States! Ah, well...we know its worth, I guess that's all that matters. ;)