The ‘Global Village’ arrives in the flesh(!) at Galway University 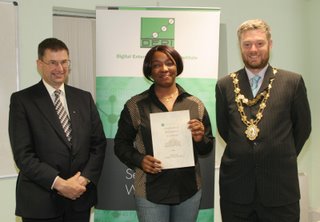 I had a really great time at an event I organised last Monday in Galway University for 18 of my asylum seeker students who had completed an Internet course held in their own hostel.
It was ‘standing room only’ for an event that had an extensive guest list that included a senior government minister (Eamon Ó Cuiv), the Lord Mayor of Galway City (Councillor Niall Ó Brolchain), local government officials, academics, police, media, community leaders…..
Speeches were made, certificates were presented, officlal photographs were taken, food was eaten…Everyone seemed to enjoy themselves!
While the Irish guests were amused at the wide ethnic diversity of the students present (Iraq, Israel, Nigeria, Cameroon, Albania, Zimbabwe, Russia, Congo…), what I found most interesting was the comments made by the asylum seekers themselves. Many were pleasantly surprised to find how easy it was to have a friendly relaxed chat with a major government minister or a mayor! Actually Eamon (the Minister!) himself said to me afterwards that he noticed how formal and reserved the students were when talking to him- some were treating him as if he was royalty.
In fact that is one of the nice things about Ireland. There is little engrained social snobbery in the country- the ordinary citizen seems to be on first name terms with everyone - even the Taoiseach (Prime Minister) and the President are referred to by their first names (Bertie & Mary) by the crowds on the street!
Speaking of the ‘masses’ mixing with the ‘elite’, this happens on a massive scale at this week’s 'Galway Races'- probably the largest and most egalitarian festival in Europe- see my blog entry in last August's archive. 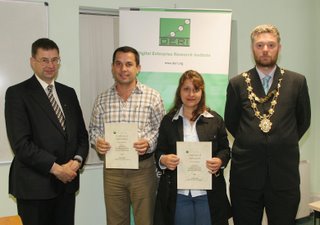