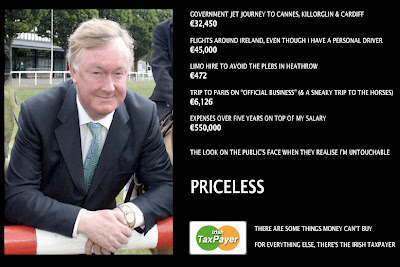 (Click on picture for larger version)
It is not surprising that John O'Donoghue and his government defenders can use in his defense that he abided by parliamentary rules thereby breaking no laws in the huge expenses that he accumulated over the last few years that was paid for by the ordinary tax-payers of Ireland.
But hasn't the ruling establishment since time immemorial written the laws to protect their own selfish interests? Morality and ethics sadly does not figure high on their agenda.
Yet even still his behaviour goes way beyond these low political standards.
For what can you say about a servant of the state that reclaimed a miserly stg£1 donation that he made to Unicef while on a visit to Scotland? Or who stayed at a 5 Star hotel and spent 65,000Euro of taxpayers monies with other TDs while attending a Conference in South Africa on Combating Poverty?!
Due solely to public anger at these unethical abuses, he has been forced to announce his resignation, the first time that this has happened to a person in such high political office since the foundation of the state?
A honourable act on his behalf? Not bleeding likely? For he has postponed his resignation until next week knowing that the Green Party at their convention over the weekend may decide to pull the plug on the government leading to the dissolving of Dail Éireann and the announcement of a general election. Clever man that John is, he knows that, as he will be still hold the office of Ceann Comhairle, he will automatically be given a seat in the next parliament hereby avoiding the anger of the people.
Selfish interest comes before civic duty.
What is the morality and sense of patriotic duty in this Green-Fianna Fáil Government. Let all true civic-minded people in both parties stand up and be counted. Demand an immediate end to politicians and top civil servants filling their pockets at our expense and a return of integrity and honesty to Irish politics.