Free Speech under threat in the Free World 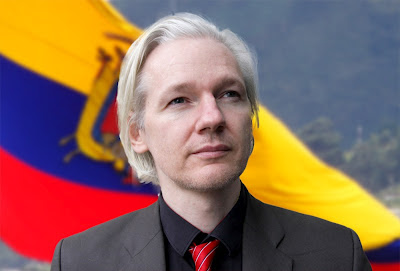 Not a good week for 'Free Speech' in the 'Free World' as the Pussy Riot musicians are jailed in Russia; Sweden and Britain try to extradite Julian Assange on what seems to be trumped-up charges; and Denis O'Brien makes a personal libel threat to sue Vincent Browne.
But thankfully these brave messengers of Truth and Justice are not allowing themselves to be coerced into silence. This includes Ecuador, which has granted asylum to Julian Assange, and is one of a growing number of South American states where people power is finally throwing off the shackles of oppression imposed by white minority wealthy elites kept in power for decades by the US establishment in return for access to cheap raw materials. It is no coincidence that Ecuador along with Bolivia which have large native Indian population became a few months ago the first states in the modern era to amend their constitutions to grant rights to wildlife, symptomatic of some traditional indigenous societies where respect for Nature matters more than monetary value.
In Ireland, it is long overdue for the government to stand up to the 'old boys network'  and take action again Michael Lowry and Denis O'Brien for what the taxpayer funded Moriarty Tribunal concluded was a corruption of Irish political system for personal gain.