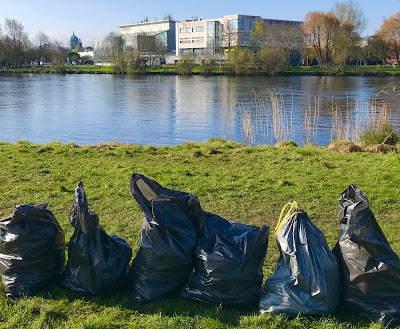 Exasperated with the high volumes of rubbish strewn on the green spaces along the Dyke Road particularly at weekends, I and my good friend Ryan Crowell on Saturday evening put on yellow vests and walked out amongst the 50 or so young people that were socialising in groups along the riverbank as they enjoyed the fine sunny weather chatting and drinking. We went from group to group telling them that, whilst they should be informed that they were breaking a number of rules (drinking alcohol in public parks, gathering together in groups wearing no masks or practising social distance), we were neither council staff nor members of An Garda Síochána but only concerned civic-minded individuals seeking their cooperation in keeping the green spaces and waterways free from litter which we pointed out damaged biodiversity, the environment and undermined the benefits of a city park to the general public. We then gave each group large black bags which we requested that they use for their leftover cans/bottles/papers should they decide not to bring this material home.

The response from the youth was very positive and some of them actually helped us collect the scattered litter and put the bags into my car for removal back to my home garden whey they would remain until after the weekend when parks staff returned to work.

Early next morning Ryan and myself visited the same site. I am happy to state that the young people had honoured their promises from the day before; the bags were filled with debris with only a comparatively small amount of cans and bottles lying in the grass or along the riverbank. Over a short period of time (Saturday evening and Sunday morning) on what was a relatively small piece of land, we removed fourteen bags of refuse,  the contents of which would otherwise have contaminated the land and the river with some of it ending up polluting the Atlantic Ocean.

Ryan and myself will continue to return on further weekends to undertake these same necessary volunteering duties.

Need for Park Wardens in Galway city is so obvious

The incident reinforced my long held belief that the presence of a full-time seven days per week warden unit, whose members are willing to engage on friendly terms with parks’ visitors,  is an essentiality that city council must implement. Community activists have been requesting this for some time. To support this development we consistently have offered our services free of charge in the capacity of volunteer park rangers to complement the full time staff on specific tasks when required and with health and safety training provided by City Hall.  Sadly we have not yet been successful in our endeavours. But thankfully councillor Imelda Byrne has put forward a motion on park wardens that will be voted on next Monday at a meeting of councillors. At present the city has one warden available on a regular half week basis in Galway. She is a fantastic committed worker but she has to take care of multiple city parks. In a time of lockdowns when green spaces and natural areas in cities have shown their crucial role in protecting human and planetary health as well as being a necessity in a sustainable post-COVID world, this can no longer be accepted, with public parks needing to be cleaned on a daily basis early every morning which is the case with many other cities. Galway City Council needs to rethink its stance, to be imaginative, creative and to ensure that it takes full advantage of the government’s offering of twenty two walking/cycling staff positions with some of these employees being assigned to plan out, design and maintain walking as well as cycling paths in our public green spaces. Such staff should also I feel have their terms of reference expanded to include warden duties.

Damage of being confined indoors & online

But the incident also clearly made me realise that we as adults are responsible for stealing the most precious years from our young people. The first year at third level college is normally when students form friendships that can last a lifetime, as well as taking up interests in social, sport, learning subjects and other activities that will shape their futures. Sadly so many of this generation will miss out on these experiences.

In spite of the hard work and good intentions of teachers and lecturers, many second level as well as third level students have lost out on a qualitative education with online learning not being able to fully compensate for the discipline and focus brought on by the controlled environment of a classroom, a lecture hall or a dedicated shared study facility. Our young people are suffering with their mental and indeed oftentimes physical health being greatly undermined during the lockdowns. Too much time spent in front of a laptop or phone screen disrupts sleep patterns and levels of concentration; can lead to stress, exhaustion and burn-out; exposes one to damaging views of sexual and other types of violence where too often young women in particular are victims and whose abuse is portrayed as ‘normal behaviour’; can distort one’s views of the world with one-sided bias ‘fake news’ arguments; and leaves users open to high levels of bullying and intimidation as well as a disconnect from the real world and opportunities to develop meaningful flesh and blood relationships. Web addiction especially online gaming is too often a consequence of 24/7 connected smart devices. I say this as someone who has for forty years (and still do) proudly promoted the benefits of computing technologies.

The best remedy for online addiction and over-reliance on hand-held devices is to practice periods of ‘digital detox’ and spend regular periods immersed in natural environments, being active on the sporting field or enjoying a leisurely time on green spaces with friends or people of a similar age. But the COVID restrictions are denying them the circumstances to do so in the Great Outdoors which is in fact  the safest place for young people to be as it is responsible for only .01% of transmission cases in Ireland.

Youth are forced to spend much of their days indoors, sometimes in poorly ventilated small spaces. All because older people and previous generations have, for short term material gain, brought humanity to the edge of the abyss due to a consumer culture and a linear economy characterised by  Climate Chaos, land/water/air pollution, plant-killing herbicides, insect-killing pesticides and pandemics. Yet even with the global society being brought to its knees in 2020/2021, adults are still making the same mistakes. Expenditure is increasing on military technology; once-off plastic production is spiralling (e.g. huge volumes of PPE masks and liquid bottles being shipped long distances from China) polluting our rivers and oceans in the process; and young people in Hong Kong, Myanmar, India, Iran, Israel, Tunisia, Turkey, Egypt, Ethiopia, Spain, Russia, Belarus, Brazil, the USA and elsewhere are being detained for speaking out against state injustices and abuse of power.

So we as adults have to heed the message of youth as spoken by teenagers such as Greta Thunberg and redouble our efforts to undo the mistakes of the past and present in order to give hope and make a world a better place for generations to come.