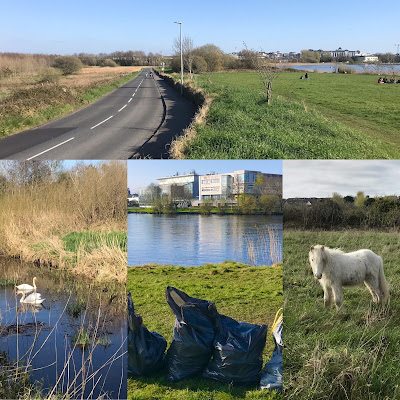 'Where Green meets Blue'- Top section of the photo shows the Dyke Road with Terryland Forest Park on one side and the River Corrib on the other. The other images show different aspects of the forest park and the banks of the river.

Galway city is so lucky to have such wonderful natural beauty so close to the city centre. Of course it did not happen by chance. For it took many campaigns and many battles over many decades by community activists to keep it from being lost to built development. But it also happened due to the foresight of many visionary council officials and councillors and their positive engagement with community activists from the mid 1990s onwards. A partnership that will led now to a long cherished demand of campaigners- a direct path link from the riverbank to the main area of the Terryland Forest Park. More to follow on this on a later posting. However after a delay of many months (from January), we are hoping that later today a motion from councillor Imelda Byrne on setting up a full-time parks warden unit is finally debated and voted through at a council meeting by councillors. Thank you Imelda for showing leadership and in taking this critical issue onboard. We do indeed have one fantastic dedicated hard working warden in Galway, namely Cora O'Kelly who does so much good. But she cannot do all of the city parks on her own whilst having other duties to perform (looking after life buoys).

Natural Spaces are our Salvation

The need for a full time seven days a week permanent on-the-ground parks personnel unit in all our major parks is now needed more than ever before. COVID has taught us the benefits to our wellbeing in walking through natural areas and in the vital role that these places play in reversing biodiversity loss, in acting as 'carbon sinks' and in improving air quality.

A Pleasant Encounter with Young Drinkers

Recently my good friend Ryan Crowell and myself spent a wonderful Saturday and Sunday in Terryland Forest Park and along the banks of the River Corrib chatting to people and informing them of the area's natural features and on its history; in picking up rubbish and in planting trees. What I particularly enjoyed the most was an engagement on Saturday evening at c4pm with scores of young people (late teens-early 20s) who were drinking and chatting in groups along the river bank. Whilst we informed them not to drink alcohol in public parks and to be aware of COVID restrictions such as social distancing, we told them that we there only as concerned citizens. In that capacity we ask them in a friendly manner to think of the damage that litter does to wildlife and in undermining other people's enjoyment of a public park. We asked them to take their litter home and, if they could not do so, to use the black bags that we distributed to all of the groups of young people. The youth were so positive in their response to us! Some of them helped us fill up seven full large bags with cans, bottles etc and remove them to my car. I have to point out at this stage that none of the young people were in any way intoxicated. Next morning (Sunday) Ryan and myself returned just after 9am as I wanted to find out if our words had any positive long lasting impact. What greeted us was indeed a lovely sight- multiple bags of rubbish piled together with green spaces and a riverbank almost totally devoid of litter! It was such a morale booster! In total, 15 large bags were collected and removed. There is no doubt in my mind where it not for our actions, much of this rubbish from one small area of the city would have ended up polluting the Atlantic Ocean.

What this incident demonstrated to me was the importance of having a permanent presence in Terryland Forest Park and other parks of friendly council (& volunteer) rangers actively engaging with visitors, keeping the parks clean, planting trees,improving biodiversity features, repairing fences... Is their money in the City Hall budget to set up such a unit? I feel that the council have to be imaginative in this regard, to think outside the box and to use for instance some of the dozens of fully funded staff positions being offered by government for developing a walking and cycling infrastructure for Galway City. After all, the parks and riverbanks will play a vital role in such a development as they already provide areas for people to walk and cycle amongst Nature.