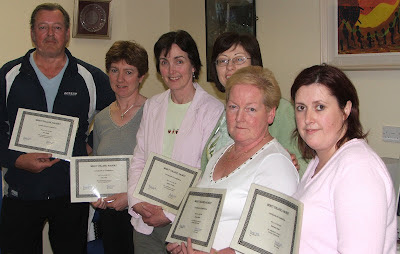 Photograph shows a group of parents from the Mercy College in Galway City who completed one of my DERI Internet courses that included an introduction to online social networks such as Bebo & MySpace.
The fast pace of technology change in the last few decades has led to individuals and even whole sections of society being alienated and feeling disenfranchised.
It happened on a continental scale with the collapse of the communist system in Eastern Europe and the Soviet Union during the early 1990s. Older men in these countries, who previously had jobs for life in the huge heavy industrial complexes such as shipbuilding, suddenly found their places of work closed down as the economies went into meltdown. Their skills were no longer needed and they did not possess the knowledge, the opportunities and sometimes the inclination to learn the modern high tech skills required in the post-communist era. Interestingly women tended to be more flexible and anyway were often more in demand for the low-paying jobs in the production assembly factories that were then opening across Eastern Europe.
However Western Europe countries also experienced a technological divide as an older generation of people were oftentimes out-of touch with the latest Internet-based communcation gadgets and systems that were quickly became so much part of the everydaay lives of teenagers and children.
So part of my remit as Outreach Officer at the Digital Enterprise Research Insitute (DERI) based at Galway University is to organise community Internet programmes aimed at bridging this technology divide. DERI now has a wide range of courses aimed at different audiences including active retirement groups, residents associations, disability organisations, neighbourhoods and parents. These are often groups whose members can feel swamped and threatened by the pace of change. My job is to help give them a working 'hands-on' awareness of the latest technological devices and encourage them to grasp the opportunities presented by the new tools and services available.
DERI is the Worlds largest institute involved in developing the next stage of the World Wide Web known as the Semantic Web. We have researchers from 15 different countries. And it is based in Galway, a city that has rich industrial, educational, social, political and cultural vibrancy.
But in spite of its high-level research 'raison d'etre', it is mandated as a recipient of government funding to have a community and educational outreach programme aimed at the general public in its locality. This is my very rewarding job to manage and to tutor, a duty that I enjoy immensely!