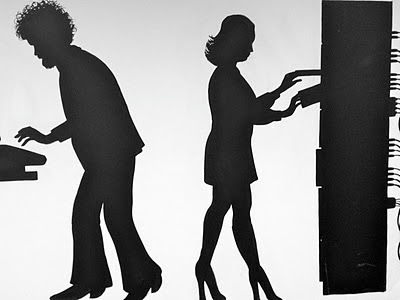 Back to the Future!
Over the last few years, Galway has undergone a remarkable digital renaissance that has brought back memories of the city in the 1980s when Digital Equipment Corporation (DEC), then the world’s largest minicomputer manufacturing corporation, was exporting computers all across Europe from its factory in Ballybrit; when the first satellite link between Ireland and North America was established at the state telephone company’s HQ in Mervue; when parents were buying their first ever microcomputers such as the Sinclair ZX81 and Commodore Vic 20 in computer retail outlets that were springing up across the city so that their children could learn the new art of coding; when a few visionary young mathematics, business and physics teachers were introducing computers into the schools; when DEC had linked the city’s second level colleges through a computer network system;
when recently qualified college graduates were establishing ‘software houses’ in little backwater offices; when small-to-medium companies en-masse were buying their first computers to run their accounts and send out letters; when the Ireland’s first Internet newsletter for  worldwide readership was being distributed by DEC’s Liam Ferrie; when electronic courses at the Regional Technical College were filled to capacity; when Apple’s Macintosh Destktop Publishing system let to the appearance of regular low cost community newsletters across the suburbs;  when new programming courses could not keep up with the demand from enthusiasts of all ages; and when students at Galway University (NUIG) were brought up before the authorities for accessing the college computer systems by circumventing its security system (what we now call ‘hacking’!). 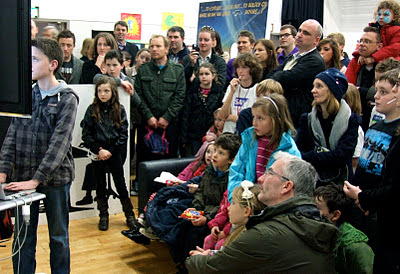 12 yr old Harry Moran demonstrating his PizzaBot App to a spellbound audience during the
Galway Science & Technology Festival Exhibition
Once again a vibrant Digital ambiance is starting to permeate the schools, colleges, workplaces and streets of the city and county fueled by a volunteer army of largely young enthusiastic and selfless Internet activists the like of which exists nowhere else in Ireland.
However as with the recent establishment of the Ballinfoile Mór Cumann na bhFear/Men's Shed, it is about Irish people recapturing the ability to use their hands and intellect to make things again rather than just be the passive recipients of items imported from overseas.
We are beginning to move away from being a nation of digital users to a nation of digital creators.
The increasing roll-out of coding classes to schools provided by volunteers from the corporate sector, NUIG, GMIT and from concerned individuals; the annual hosting of a national children’s Lego Robotics competition; the IT summer camps at NUI Galway; the establishment of groups such as 091Labs, Camara and Coder Dojos; the high uptake by older peoples and other communities of Web Awareness courses; the massive crowds that attended events held during the Galway Science & Technology Festival (24,000+ at the Sunday Fair on NUIG campus); the existence at NUIG of world-renowned science research institutes such as DERI; the establishment of Ireland’s only Computer and Communications Museum (at DERI) and the presence of global technology leaders in the city such as Hewlett-Packard, Cisco, EA, Medtronic and IBM is radically changing the local landscape that in time could metamorphose into an innovative sustainable Knowledge economy and society providing a healthy future for Ireland that will benefit other countries across the planet.

As Community/Education Outreach Officer at the Digital Enterprise Research Institute (DERI) at NUI Galway, I am part of this process of change which involves some very exciting initiatives. 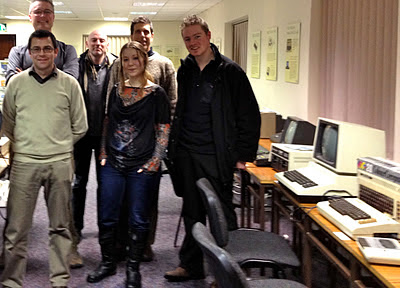 Galway Coder Dojos first group of volunteers with founder Adrian Bannon on the extreme right
The city’s first Coder Dojo club will be launched next Saturday in DERI. The engine behind this initiative is young local lawyer Adrian Bannon supported by a merry band of enthusiasts including Padraic Hartley of 091Labs ‘hackerspace’ group and Michael Madden of IT NUI Galway.  The new club will meet weekly in DERI before transferring in early April to the College of Engineering & Informatics located on the main campus. It will provide an opportunity for students, pupils, teachers and technology enthusiasts to meet like-minded peers in an informal social and learning environment where they will be educated in new skills particularly in coding and generate interesting ideas and discussions amongst themselves. It is anticipated that, over time, this pioneering club will led to the setting up of Coder Dojo clubs in schools across Galway city and county.
2. Scratch Programming Courses in Galway Primary Schools 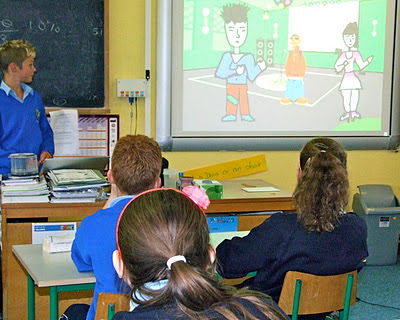 Children displaying their Scratch project to their fellow classmates
Computer Science is unfortunately not a subject in the Irish schools system which is symptomatic of a systematic failure by successive governments who have failed to grasp the serious damage that its absence from the educational curricula is doing to the country’s future.
Since early 2011, I have campaigned and organised cross-sectoral groups to lobby ministers on this issue and will soon be part of a delegation  to meet  Seán Sherlock T.D., Minister of State with responsibility for Research and Innovation, on this issue.
Over the last year, I have enjoyed teaching Scratch programming in primary schools in Galway and Mayo, complementing the excellent work being spearheaded by LERO nationwide It has been personally very rewarding for me to see the practical effects of this initiative through the creation of an array of fascinating computer animation projects by the young participants.
DERI is now collaborating with Hewlett Packard, GMIT and the Galway Education Centre to ensure that even more schools can benefit from mentor-assisted classroom computer programming courses. The project will be known as HP Headstart. On behalf of DERI, I will be acting as project coordinator and over the next few weeks I will be teaching Scratch to the DERI, HP and GMIT mentors.  Tuition will be held in participating schools and consist of one-hour classes over a period of six weeks. 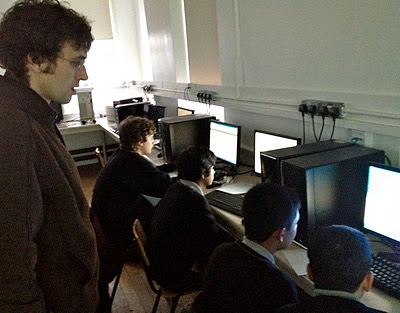 DERI's Michael Kerrin teaching Python at St. Mary's Computer Club
Last year, Laura Dragan and Pierre Ludwick from DERI provided an after-schools C++ programming course to students at St. Mary’s College. This after-school club, the only one of its kind in Galway, was very well received and it continues this year with DERI’s Michael Kerrin teaching Python. 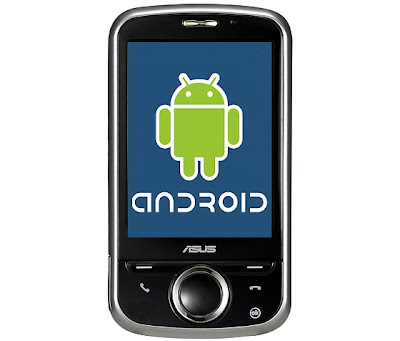 DERI’s Caoilfhionn Lane will provide a workshop on ‘How to Build A Mobile App’ at 7pm on Tuesday February 28th in DERI. Open to the general public, the aim of this workshop is to show beginner or non-programmers how to create a simple phone app using Eclipse and the Android SDK. They would learn how to install the Android SDK and the Android Phone Emulator and explore a sample game, ’Lunar Landing’.
5. Retro Games Night, March 2nd, Computer Museum 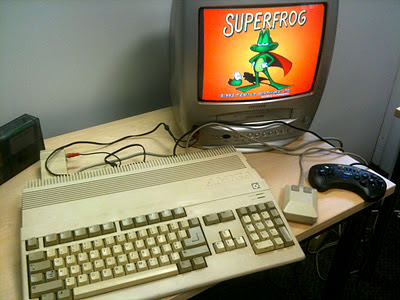 SuperFrog on the Amiga (World's first multi-media computer)
A Retro Gaming Night will be held at 7pm on Friday March 2nd in the DERI-based Computer and Communications Museum of Ireland.
The event will allow visitors to play classic games such as Sonic the Hegehog, Donkey King, Pacman, Asteroids, Space Invaders and Super Frog on an array of vintage microcomputers & consoles (late 1970s-mid1990s) that include Atari, Sega Mega Drive, Playstation 1, Nintendo Gameboy, Amiga & Commodore 64.
6. Computer and Communications Museum of Ireland 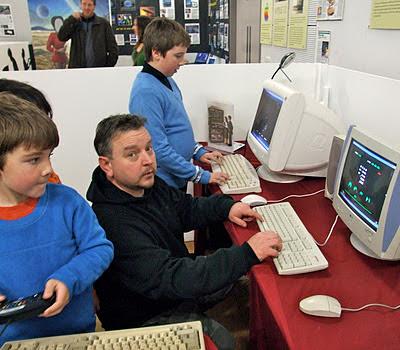 Visitors interacting with the Museum's artifacts
The facility, established by and presently housed in DERI, is officially recognised as the Computer and Communications Museum of Ireland and has become part of a Galway science trail.
It has a cross-sectoral Board that draws its membership from HP, GMIT, NUIG, Engineers Ireland, small businesses as well as DERI (Mike Turley, Lukasz and myself).
Its primary aim is to introduce visitors to the rich communications technology heritage of Ireland and of the world and to inspire young people towards innovation, science and engineering.
For National Engineers Week (Feb 27 – March 2nd), I am augmenting the present collection of artefacts with some exciting new additions including one of the finger controlled keysets that was invented and used by Douglas Engelbart in his legendary ‘Mother of all Demos’ (1968) that is on loan from Karl Flannery of Storm Technology, as well as a library of 1960s Science Fiction comics, films and toys that inspired children of that era to create so many of the technologies we use today. 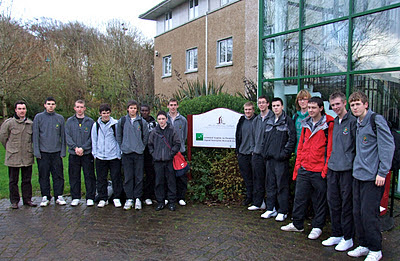 Post-primary students visiting the DERI science institute at Galway University (NUIG)
Second-level schools will visit our institute during National Engineers Week (Feb 27 – March 2 and DERI personnel will travel out to at least one school during this period.
These tours and visits will give students the opportunity to meet with DERI researchers and find out about the work and the exciting leading edge products, processes and services being created at DERI.
They are also part of a larger network of tours that cover four other world-class science institute specialsing in research varying from climate change, to biomedical to optics.

Great post, and great to see such interest in coding in Galway. I am based in Silicon Valley, and we can't find enough coders to work on projects here! I think there are some great OOP tools such as Alice (http://www.alice.org/index.php?page=what_is_alice/what_is_alice) which help kids to learn Object Oriented Programming, and this could be the first building blocks towards C or C++
programming.

I never knew there was such an interest in this in galway, and it's great to see DERI and people like yourself working on this.

Send me your email - can't see it on your blog.

Greetings Philip.
Many thanks for your commentary and suggestions, particularly your reference to Alice. Much appreciated.
My personal email is speediecelt@gmail.com.

Ashksngh said...
This comment has been removed by the author.
6:44 AM

I am amazed to see the schematic for “DIGITAL SCHOOLS COMPUTER LINK UP SYSTEM”. I can remember the Terminal in the corner of the Bish’s only Computer Room. In those days it was only an after school class. But we had to entertain ourselves with the BBC Micros as nobody was allowed to touch the VT100.
But there were rumors that it was connected to the DEC Facility, but some unknown and mysterious means.