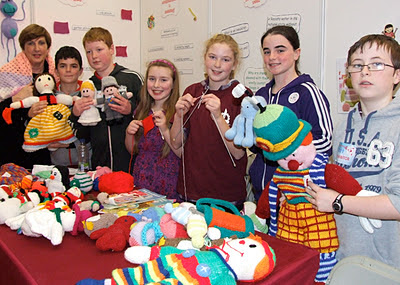 One of my personal highlights of 2011 was in convincing Lawrencestown National School to exhibit at the Galway Science and Technology Science Festival Exhibition. Nothing special about that one might say as I annually coordinate the involvement of schools into this one day fair that is the highlight of a 2 week festival which this year took place in Galway University (NUIG) attracting over 24,000 visitors representing the largest crowd ever to appear on campus.

But what was different about this school was that they were demonstrating something that many people might feel has absolutely nothing to do with science or technology, namely the ancient handicraft of Knitting.

Yet this popular misconception could not be further from the truth. For mathematics is at the core of this traditional craft that produces fabric from a strand of yarn or thread.

Whilst working in the school during the course of the year, teaching the basic concepts of engineering using K’NEX, I noticed that the pupils of both sexes would sometimes take up knitting during lunchtime if it was raining outside. The classrooms also a fine display of woollen animals and objects.
I was intrigued!
The children told me that it was due to the pioneering efforts of teacher Davina Daly that the children were learning the joys and creativity of knitting. Rather than just buying ready-made toys, clothing and gifts as most children have done for the last few decades, these boys and girls were making their very own scarves, rockets and animals out of fabricating yarn with each item that they produced stamped with their own unique style and individuality.
Over the next few months, I noticed too that a few other schools were also doing likewise, once again due to the initiative of individual teachers.

'Knitting with Granny'
Then in September I found my own 11 year old son Dáire starting to take up knitting with a passion as a result of a new national educational scheme known as Knitting with Granny, whereby older women were being brought into the classrooms to show young people how to knit.  Dáire created an ever-growing menagerie of animals that began to populate the whole house. I was hooked! 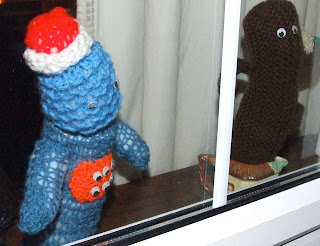 Not only are primary schools reviving and giving a whole new lease of life to a very important aspect of the country’s heritage, stitching is introducing these young people to a practical understanding and usage of mathematics via the counting of stitches, the calculation of gauge (that is the number of stitches and rows required to knit a 10cm square for a particular yarn), the creating of patterns and the quantification of yarn required. 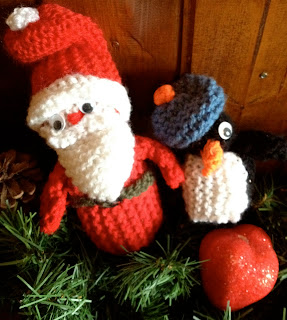 Some of Dáire's Christmas knitted Santa Claus and helpers

The Makers
As with my work in helping to introduce computer programming into primary and post-primary education sector, Knitting in schools is part of a vision of educating our people to once again become designers and makers of practical things rather than just users and recipients of items manufactured outside Ireland. It will help our national move from a having a culture of dependency to a culture of creativity.

According to Davina, “The knitting craze started in our school two years ago when Evelyn Reidy a friend of my mother's dressmaking instructor Mary passed away. Evelyn's daughter gave Mary all her knitting needles and wool. Mary passed all the knitting materials on to my mum and then to me. I didn't want the wool to go to waste so I brought it to school. The children from second to sixth class took and used whatever wool they needed.
Jean Greenhowe has a fabulous collection of knitting booklets for irresistible dolls and toys http://www.jeangreenhowe.com/booklets.html.  I have bought a number of them - The Scarecrow Family, Little Gift Dolls, Knitted Clowns, Jiffyknits, Knitted Animals, Christmas Special and Christmas Treasures. The children have knitted various items from these booklets. Some of the children buy knitting magazines. Another mom gave her son a magazine that had knitting pattern for boys in it. There was a pattern of a rocket, a dinosaur and a turtle. Some of the children knitted them.

The first stitch the children learn is the Garter stitch (AKA plain stitch). Every row is knit. Once the children have mastered this stitch they learn how to cast on and off stitches. They knit simple hairbands (sweatbands for boys) and wrist bands to practise this stitch. Then they learn the Stocking stitch (aka purl stitch - knit on the right side, purl on the wrong side).
After this they learn how to read patterns. As the patterns get more and more complicated they learn more and more knitting techniques: inc = increase stitches, dec = decrease stitches, psso = pass slip stitch over and so on.
They've knitted dogs, owls, turtles, bears, scarves, penguins, santas and snowmen.
One boy knitted Mrs Claus for his grandmother (finished height 36 cm).
At Christmas the children knitted Christmas trees, Christmas stockings, candy canes, garland rings to hang on their Christmas trees. At Easter they knitted chickens. One girl knitted a rattler for her baby brother and another knitted Binky the Golfing Clown with the help of his Granny.”

Wooly Science
The school exhibited their Knitting project during the  Galway Science and Technology Festival Fair that was held in NUI Galway on November 27th and was visited by over 24,000 people. With the theme of Wooly Science, their stand was one of the most popular as visitors were enthralled to see a line of children knitting away whilst explaining the mathematic basis of this ancient handcraft.