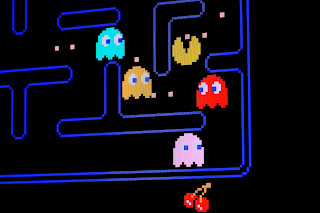 One of the greatest video games of all time, Pacman is 40 years old this month and yet remains as popular as ever.
Created by Toru Iwatani and a team at the Japanese game company Namco, it was released on May 22nd 1980. It was the first game written to appeal to a female audience. Iwatani saw that the whole video games industry catered only for men and concentrated on sport and violent war themes. Only boys seem to populate the arcade machine halls. So he decided to develop a game with cute, happy looking bright coloured characters based around colourful foods such as deserts and sweets. One of the inspirations for the Pacman image was a pizza with a slice removed. The ghosts in the game were inspired by the television series Casper the Friendly Ghost.