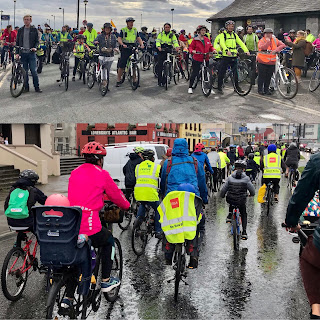 Decision by 14 Galway City Councillors to overrule the Public Consultation on the Salthill Cycleway harms Local Democracy. In September, 17 Galway City councillors voted in favour of a temporary cycling infrastructure for Salthill. Only one voted against. This was welcomed by so many of us as a major step in finally implementing a 2002 policy to develop a safe citywide cycling and pedestrian infrastructure. In the largest ever consultative process organised by Galway City Council in January, nearly 7000 submissions were received from the public on the options put forward on the type of Cycleway that would be installed next month and which would remain in place until September. The cost of this infrastructure would be funded by the National Transport Authority. Much of these monies could later be recouped if the Cycleway became, with critical reconstructs, a permanent cycle way. Now 14 city councillors have signed a motion to revoke their backing for the Salthill cycle path trial before the results of the public consultation has even been published. Mayor Colette Connolly, Deputy Mayor Martina O'Connor, councillors Owen Hanley and Niall Murphy are not part of the 14 councillor grouping. I am shocked at this decision and in all my years since the mid 1980s when I started engaging with Galway City Council as a community activist, I have never seen such arbitrary action. This in my opinion is a slap in the face to every person that took the time and effort to submit their views in the consultation process. It undermines trust in City Hall, makes a mockery of public engagement and puts a question mark over every future local government consultation. Every person that took part did so in good faith and felt that the option favoured by the majority would be implemented on a trial basis. For councillors to change their opinion, based on new information etc, is their right and is good in many cases. But no matter how people voted, it is only respectful to wait for a new motion until the results of the consultation are published. I know most of the 14 councillors involved and some of them I consider good friends who have done great things for the city over the years. Even if the consulation is non-statuary, their present action harms local democracy. Our great city and its citizens deserves better than this. There are renowned practitioners in the arts, science, technology, education, health, small business, corporate business, sports and amongst NGOs in Galway that serve as inspiring role models to people all over the world. Their perseverance, innovation and pioneering spirit is respected by so many and has given Galway an international reputation second to none. But sadly governance in some parts of City Hall is seriously stagnating. The European City of Culture 2020, the Pálás Cinema and Eyre Square episodes were badly handled and cost the taxpayers millions. We are now falling behind other cities in terms of genuine community engagement and in not implementing the polices that are needed to create a sustainable economy and society to tackle the Climate and Biodiversity Crises. The council also recently voted not to include the Galway National Park City initiative, and a Waterways Strategy, in the City Development Plan 2023-2029 that would laid the foundations post COVID to build our city back greener and better. These decisions defy logic in the 21st century. Does our city now need a new generation of MichaelDs who have the courage, vision and passion to provide the political leadership that is soo desperately needed to fulfill our United Nations (17 Sustainable Development Goals), EU (Green Deal) and national (walking/cycling/public transport) commitments? None of the options presented represented the solution that could have been designed to meet the needs required and sadly have turned good people, that should have been natural allies, against each other. I voted for Option 2 but it was a question of Hobsons Choice for so many of us. Much more thought should have been given to the planning of these proposals before they were issued. The councilors and officials collectively could have worked together to come up with something much better. The people of Galway urgently require a city wide safe pedestrian and cycling infrastructure. We have waited 20 years and we need a sustainable way forward.