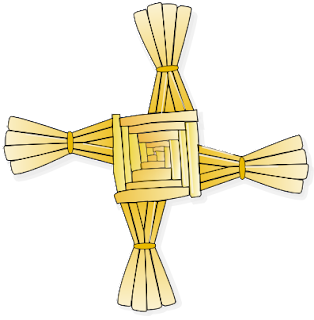 February 1st is the first day of Spring in the Celtic calendar, the season of birth and re-birth that follows the cold barren months of Winter. In Ireland, it is known as Lá Fhéile Bríde as it is dedicated to a female, St. Brigit (or Bridget, Brigid, Bride), the country's most famous native born saint. Children in schools across the country mark the occasion by making a distinctive traditional four armed cross woven out of reeds that is named after the saint. Her name also has a strong affinity with a Celtic deity associated with fertility and symbolised by 'fire', the element that offered humankind protection from the natural deadly forces of winter.

Brigit is second only in the Irish saints' calendar to St. Patrick who was born in Roman Britain.
The fact that Brigit was female is quite significant as the early Celtic Church in Ireland was unique in contemporary Christian Europe in giving considerable recognition to the role of women. Irish society was not as patriarchal as their Roman, Greek or Germanic neighbours. According to the historian Dáibhí Ó Cróinín in his book 'Early Medieval Ireland', a woman could divorce her husband for a variety of reasons (including if he failed to satisfy her sexual needs!), could own and inherit property and was treated as an individual in her own right with inherent protections under Celtic law. Women fought on the battlefield as warriors until this was banned by the church.

Celtic female influence extended as far as Iceland....
Even outside Ireland, the influence of Irish women at this time (5-7th century) was felt- St. Ives in Cornwall is called after an Irish female saint (a.k.a. Eva or Aoife), St.Grimonia & St. Proba lived in France (Gaul) in the 4th century, St. Dardaloch in Pavia, Itay (c.300ad) and the nunnery in Austria made famous in the film and musical 'The Sound of Music' was probably founded by an Irish female missionary (Erintrude). In Iceland the hero of one of the great Icelandic Sagas is the Irish female slave Melkorka, a stong willed woman who refused to be coerced by humiliation, rape and brutality. In fact it has been noted by some that the status of women in Iceland (where I lived for a number of years), which was higher than in contemporary Scandinavian societies, possibly owed its origins to the impact exerted by the high number of Irish women living amongst the country's early Viking settlements- they were brought to the country as slaves and wives from the Viking towns of Ireland. It has been said that it was their influence that persuaded many of their pagan husbands to vote in favour of the country's adoption of Christianity at the famous 'Althingi' (parliament) of 1000AD.

This independent-minded spirit must have left a lasting legacy as Icelandic women were amongst the most successful in securing equal rights for women's during the course of the 20th century.

Female Celtic Warriors
Celtic mythology provides ample evidence of the power of women in pre-Christian Ireland. The country itself -Éire ('Ire(land)' in English)- is named after a goddess; the names of most of the great rivers with their life-giving waters are associated with nymphs, goddesses and female animals; the Celtic God of War (Morrigan)- the most masculine of activities- is female. Some of the most powerful Celtic rulers were women such as Queen Maeve and Queen Boadicea. (Bó = Cow in Irish) 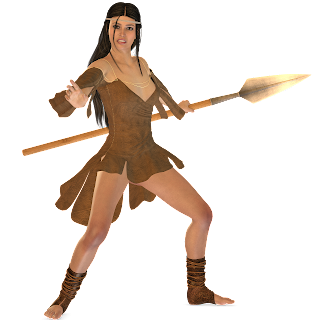 The fiercest and most macho hero in Celtic mythology is 'Cuchulainn'. Yet he was actually totally female-dominated(!):
High Status of Brigit in Celtic Church & pagan associations
Brigit was also a powerful Celtic goddess of fertility associated with the birth of animals and symbolised by fire. Hence her links with one of the four great pagan festivals of the seasons- the Spring Festival of 'Imbolc' which occurs in February and the time of 'lambing'.It is therefore quite possible that St. Brigit was originally a high priestess of the pagan goddess Brigit who converted along with her female followers to Christianity during the time of St. Patrick. 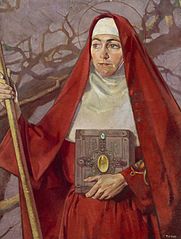 According to legend St. Brigit was the daughter of Dubhthach, an Irish chief, and one of his 'Picttish' (from modern Scotland) slaves. She was made a bishop by St. Mel (whom the actor Mel Gibson was named after) and founded one of the most famous Irish monasteries beside an Oak tree on the plains of Magh Liffe thereafter known as 'Cill Dara' or Kildare- 'the Church of the Oak Tree'.In the Celtic pagan religion, trees were considered sacred, none more so than oak trees which were prime locations for spiritual worship.The monastery also was the repository of a 'holy flame', another clue to its possible pagan origins as a temple of Druid priestesses in a sacred woodland. It also has striking similarities to the story of the 'Vestal Virgins' of Ancient Rome whose primary task was to maintain the sacred fire of Vesta, the goddess of the 'hearth'.Under Bridget's leadership as Abbess and bishop, Cill Dara became a great place of spiritual learning and of the arts/crafts particularly metal work and illumination. For centuries thereafter, each succeeding Abbess of Kildare took the name of 'Brigit' and was regarded as a person of immense stature thoughout Ireland with the monastery being second only to Armagh in its ecclesiastical importance.

Rape of Brigit & decline in the status of Women in Irish society
But over time, the importance of women in society was reduced as Viking raids, wars and the growing influence of the patrician 'male only' Vatican took its toll. The death knell came in 1132 when it seems troops of the King of Leinster Dermot MacMurrough sacked the monastery, raped the abbess Brigit, carried her off and forcibly had her married to one of his followers. As is the case throughout the history of humanity, 'rape' is used as the ultimate weapon against female independence and the physical symbol of man's power over womankind. McMurrough is the same man who invited the British Normans to Ireland to aid him in his wars; they of course soon decided to conquer the country for themselves staying in the process for over 800 years.