'Death of a Gentleman Politician'- the Honourable Michael Leahy 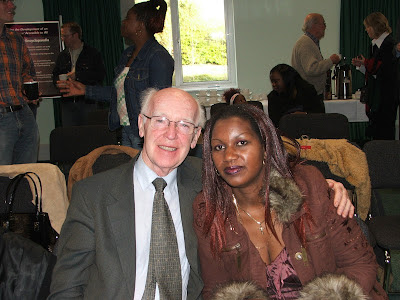 The recently deceased Councillor Michael Leahy with Catherine Njemanze, at last December's Awards event in NUI Galway for Asylum Seekers who had completed the DERI Internet Awareness Course .
A former Mayor of Galway City and a current Fianna Fáil councillor, Michael Leahy was buried this week. He was without a doubt a true gentleman of Irish politics .
Though I would have had many political clashes and disagreements with him over the years on such issues from the the Ronald Reagan Presidential visit in 1984 right through to the controversy on the municipal incinerator, nevertheless there was never any personal animosity between us. He was a very honourable and humble man that never held a grudge.
We worked together for four years (2000-2004) as members of the inaugural Galway City Development Board. (CDB). This group was a ground breaking partnership movement set up under the state reform of local government structures. I believe that these CDBs have had little positive impact on planning and development nationwide. Except in Galway where we secured such revolutionary goals as making the city 'pedestrian-friendly, cycle-friendly, disability-friendly and child-friendly' and the creation of 'wildlife/ecological corridors' as part of the CDB Strategy 2002-2012.
The adoption of these and many other innovative objectives had much to do with the fair-mindedness and diplomatic machinations of the CDB chairperson, Michael Leahy.
He also attended many of my Outreach functions at the university and turned up as a participant at one of my blogging workshops earlier this year. Always willing to be supportive was our Michael.
He once said to me last year, "...When I first met you in person, I thought of you as one of those feckin' leftie troublemakers as your reputation proceeded you. But when I actually listened to what you said, I thought well maybe there is some sense in some of the things he says after all..."!
In the last few years, I would have considered Michael a friend.
He was also highly admired by constituents for his unselfish, tireless and untrumpeted work on their behalf. The Taoiseach Bertie Ahern publicly stated this week that he was a true 'republican and socialist'. This though came as a complete surprise to me, so it shows you how much I know! But I never met Michael at any of the many republican and socialist meetings that I attended. Still, that said, maybe the two of us had more in common politically than I thought!
May you Rest in Peace, Michael.

Thank you very much for your kind words re my father.I know that in more recent years hsi opinions of you did change(for the better!!)