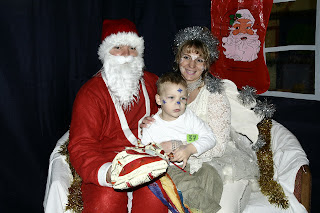 Christmas is not a good time to be separated from family and loved ones. Especially if that separation is due to war, famine or poverty.
So as someone involved in working with asylum seekers on a weekly basis (through my computer Internet Outreach classes) Christmas, I and other support agencies personnel decided to help organise something really special for the residents of the Eglinton Hotel Asylum Seekers Accommodation Centre.
Through the in-house residents' support committee, we planned an exciting fun-packed party that took place the week before Christmas.
It went like clockwork thanks particularly to the hardwork of Karen Winner (a professional clown!), Maeve & Adrienne from the Health Board, 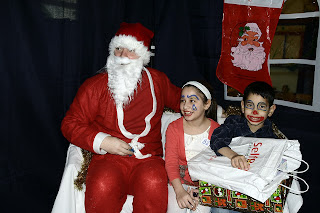 my two ever-reliable Iraqi friends Adil & Huda and to the Mayor of Galway City.
There were hundreds of gift- wrapped presents for all the young people (from the newly born to the older teenagers); lashings of food and drink; colourful wall/ceiling decorations; seasonal music playing in all the public rooms; a films show; face -paintinf for the children, the performing antics of the Snow Queen (Karen Winner) and her troupe of gorgeous female fairies; a Christmas Tree at reception decorated by the younger residents; a children's choir; and a foot-stomping discotheque for all ages. Dozens of residents dressed up in exotic native costume or appeared 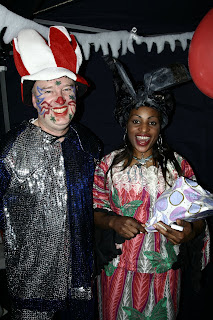 brilliantly disguised as fairies, elves and clowns (including myself!).
But the occasion was really topped off by the arrival of the Mayor of Galway City in the guise of Santa Claus!! Mayor Niall O Brolchain arrived in his chauffeur-drive limousine in the red clothes and white beard looking every inch 'Father Christmas'. (He agreed to my request to take on the role!). He was formally received in the foyer by the Children's Choir and up to 200 happy hand-clapping residents.
He was then escorted to the playroom to take his position in a specially constructed huge grotto where he stayed for 2 hours giving out advice and toys to each and everyone of the 80 or so young residents of the Eglinton.
The event was photographed by Eglinton employee Lubomir Hrivnik for the benefit of all the families who experienced this wonderful occasion. Brendan you make a great court jester.Well you are an entertainer after all... :)