Global Warming: 'Playing the Fiddle While the World Burns' 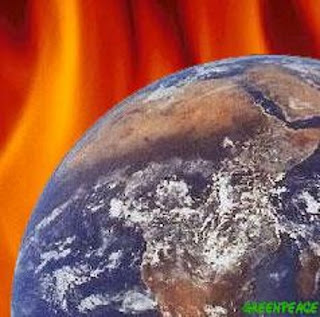 I mentioned last week that I wrote a letter to our local newspaper -The Galway City Tribune- in response to one of their columnists (Dick Byrne) rubbishing the claims of environmentalists and others over the melting of the Polar Ice Caps.
Amazingly I had to write another letter which was again published as a reply to another article (from an anonymous writer) that also took issue with the opinion that man's activities are contributing to 'Global Warming'.
So see what you think..........!

Letters to the Editor
'Playing the Fiddle While the World Burns'
The content and tone of letter in last week’s Tribune from an anonymous (why?) a.k.a. Homo Vexus reader reminds me of someone at the bar of a sinking ship wondering why other once sane passengers and crew are getting so upset and why the hell he cannot get a damn drink! The reason, my dear Homo Vexus, that so many of your fellow homo sapiens are jumping on the Greenhouse Effect Bandwagon is that, thanks to scientific analysis and first-hand observations, we getting a clearer picture of the dramatic changes the world is rapidly going through. Modern microchip technology can now help us to record and analyse past and present rates of climatic change, extrapolate the causes and estimate the effects on the world of the future. To paraphrase the writer’s words, these conclusions are based on measured scientific “study, research, causation association and discipline”. But we don’t need this scientific know-how alone to realise that big weather changes are occurring at an accelerating rate; for we can see it with our own eyes and from our own experiences in our short life-times. In some areas of the world, it is more obvious than others. Compare photographs of tropical glaciers taken over a 40 year period and view the massive decrease in size. I lived in the northern climes of Iceland for a number of years and listened to older people talk of their fears as they told of temperatures that have suddenly warmed in recent decades. That is why an increasing amount of people from all walks of life (tour operators, insurance companies, manufacturers, multi-national retail outlets, conscientious urban planners, farmers, governments, economists, environmentalists, scientists, churches, grassroots communities, and of course Arnold Schwarzeneger...) are seeing the writing in the sky, are getting fearful and promoting individual, local and coordinated global action on the critical issue of increasing atmospheric warming. Only this week six major US energy companies demanded that President Bush introduce mandatory controls on greenhouse gas emissions. The recent British government-commissioned ‘Stern’ report makes abundantly clear what the consequences are if action is not taken. But while these concerned people cannot be dismissed as caricature Doomsday ‘sackcloth/ashes’ religious-type zealots, their message to mankind has similar overtones, “Repent from your sinful path of selfishness or suffer the apocalyptic consequences of your collective greed.” Of course there were global changes well before man ever came into existence as natural and cosmic forces shaped and reshaped the planet. Earth is in a constant state of alteration; deserts were once jungles, mountains were once sea-beds. Volcanoes have in the past, and will in the future, effect global temperatures. But present global change is different to all others: this one is man-induced. Therein lies the central message. We caused it: we should try to change it before it is too late. No other living species has managed to impact so quickly on the plant as much as mankind. We flatten mountains, drain lakes, obliterate forests, create deserts, wipe out thousands of other species…and change weather patterns by our activities. According to NASA, the majority of climatologists recognise human activities as the main contributor to this alarming new pace of change. The large individual chunks of Antarctic ice shelves falling off into the sea are the size of Luxembourg and can be 12,000 years old. Of course there are those such as the Bush Administration who, dancing to the tune of their oil producing carbon-belching paymasters, blindly ignore the reality of what is happening in the world today and imitate Nero as he played the fiddle while Rome burns. But thankfully there is a growing consensus worldwide that something drastic needs to be done if we are to provide a future for our children’s children. Yet we as individuals can all do our personal bit by living by the green motto of ‘Think Global, Act Local’.
Yours sincerely,

Have you ever wondered why all the news on global warming is from the northern hemisphere? Why is only the arctic shrinking whereas no one speaks about the antarctic expanding? Or is it true that this global warming thing is just a farce and we are jumping jacks in the whole drama.

Actually Kasturi, I specifically mention the Antarctic polar ice cap in my previous posting on the subject of climate change. Check out
www.brenspeedie.blogspot.com/2007/01/ignoring-reality-of-polar-ice-meltdown.html
However you state that "...no one speaks about the antarctic expanding?..."
Where did you source this statement from?!!
All reputable climate scientists and organisations (NASA, UN etc) would disagree with such a statement that goes against all credible scientific studies and first-hand evidence