Ignoring the Reality of the Polar Ice Meltdown 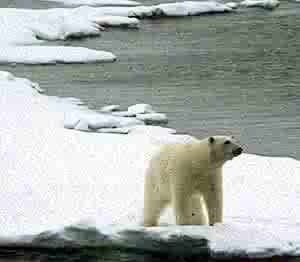 Ireland is being battered by storms, December snow is but a dim & distant memory, flowers are blooming in winter, the average yearly tempartures are rising...
Yet it is hard to believe that some people still cannot accept the reality of Global Warming even when it is staring them in their faces and when they are provided with increasing amounts of hard scientific evidence. Recently a columnist in a local Galway newspaper (Connacht Tribune) Dick Byrne condemned those warning of rising greenhouse gas emissions as scare-mongering. It is not only President Bush, the darling of the oil corporations, that ignores the obvious!
Below is my reply to him that was published in this week's edition of the newspaper:

Last week’s ‘Under my Hat’ column by Dick Byrne was full of factual inaccuracies on the issue of global warming. He belittles the idea that melting ice in the Arctic region will lead to raising sea levels on the basis that the polar ice cap already floats on water. But the fact is that glacial ice in the Arctic region also covers an enormous landmass that includes Greenland and parts of North America and northern Russia whose disintegration will definitely impact on sea levels. NASA’s photographs show conclusively that the Greenland ice sheet is retreating in some parts at the rate of one metre per month. It is estimated that its disappearance could lead to global sea levels rising by 23 feet. The satellite images also dramatically portray the massive retreat of the seaborne perennial ice caps since 1979.
Polar ice reflects back 90% of the sun’s light; its disappearance allows the oceans to heat up, thereby increasing each time the rate of melting and further accentuating global warming. Furthermore, the release of these northern freshwaters into the salty oceans is already slowing down the Gulf Stream which will have a serious impact on the climate and therefore human habitation of Britain and Ireland.
Mr Byrne then comes out with the astonishing statement that “…the Antarctic appears not to be melting, so there is no real problem from that area…” This comment flies against the majority of scientific evidence available today. The US based National Snow and Ice Data Center (NSDIC) estimates that 13,500 sq km of ice shelves in one area alone (Antarctic Peninsula) has broken off from the continent since 1974. The largest breakage was a 3,250km section of the Larsen B ice shelf which dropped off into the sea in 2002.
Rather than berate those politicians who have awakened from their slumber to discover that global warming is a terrifying reality, he should encourage them to do more in sharply curtailing greenhouse gas emissions and using the technological creativity of humankind to save rather than destroy life as we know it on Planet Earth.

I got this story from freebetv's MNN News channel on my phone:

A Norwegian glacier has shrunk on an island 1,000 km from the North Pole, a usually frozen fjord is ice free and snow bunting birds have migrated back early in possible signs of global warming. At the tail end of the Arctic winter, polar sea ice extends less far south than normal around the Norwegian archipelago of Svalbard in what may be linked to a warming widely blamed on greenhouse gases released by burning fossil fuels.